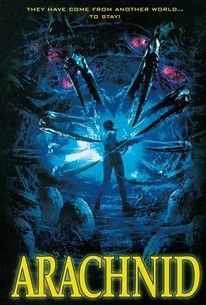 A plucky pilot searching for a missing relative gets bugged by a island controlled by giant spiders in this horror opus. Mercer (Alex Reid) is a pretty but all-business female pilot whose brother is a novice flyer. When a small plane he's flying crashes on a small island in the South Pacific, Mercer immediately assembles a crew and sets out on a rescue mission to find her brother. Joining Mercer in the search for her brother are Valentine (Chris Potter), a mercenary handy with a gun; Dr. Leon (Pepe Sancho), a tough-talking physician; Capri (Ravil Isyanov), a scientist investigating a strange disease that's been traced back to the island; and Susana (Neus Asensi), a good friend who is bright and resourceful. When Mercer and her associates arrive on the island, they believe they're ready for anything, but they're not prepared for what they find -- a breed of huge and deadly spiders, who are ready and willing to defend their territory and begin picking off Mercer's crew one by one. While shot in Mexico by a Spanish production company, Arachnid was co-produced by American producer Brian Yunza (through his multi-national Fantastic Factory production house), and helmed by American director Jack Shoulder. ~ Mark Deming, Rovi

Arachnid is so dumbed-down that even its resident spider expert/expositor, Dr Henry Capri (Ravil Isyanov), has as his one academic credential a published book named "Arachnid fun facts"

Arachnid is a pretty good movie. Alex Reid was really the only good point as far as acting goes. The spider and centipedes looked pretty decent. The storyline is all off course a bit predictable. The special effect was bad. But, overall, this is an enjoyable movie.