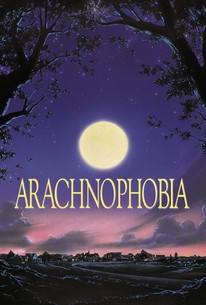 Critics Consensus: Arachnophobia may not deliver genuine chills, but it's an affectionate, solidly built tribute to Hollywood's classic creature features.

Critics Consensus: Arachnophobia may not deliver genuine chills, but it's an affectionate, solidly built tribute to Hollywood's classic creature features.

Critic Consensus: Arachnophobia may not deliver genuine chills, but it's an affectionate, solidly built tribute to Hollywood's classic creature features.

Referring to the fear of spiders, Arachnophobia features a particularly deadly species of spider that manages to make its way from the Venezuelan rain forest to a small California town, thanks to the many oversights of entomologist Julian Sands. Yuppie doctor Jeff Daniels, fed up with the dangers inherent in big-city living, has resettled in this town on the assumption that nothing untoward could ever happen here to himself and his family. Before long, however, Daniels is trying to make sense of a series of sudden deaths-and to figure out why each of the corpses has been drained of blood. The audience, of course, knows that the culprits are those pesky South American spiders, which grow larger with each kill. To make matters worse, Jeff Daniels suffers from a profound case of arachnophobia. John Goodman supports the cast as a slovenly exterminator, and Frank Marshall, longtime producer of Steven Spielberg's films, makes his directorial debut in Arachnophobia.

Its screams are likely to be drowned out by a cacophony of joyful wails reverberating in the theaters when Arachnophobia creeps toward an edge-of-seat conclusion.

[Goodman] is a quiet hoot, fancying himself as the last samurai in the battle against bugs. His performance takes the edge off the horror and makes ''Arachnophobia'' palatable for people of all ages.

The dexterity of the spiders as they merrily look for their prey is matched by the dexterity of Frank Marshall's direction in its nimbleness and sense of fun.

Frank Marshall's sophisticated feature directing debut never indulges in ultimate gross-out effects and carefully chooses both its victims and its means of depicting their dispatch.

Designed to reduce the audience to a squirming mass, the film yields plenty of grisly pleasures.

A tension-laden web full of solid scares and well-timed wit in what is virtually a version of Alfred Hitchcock's The Birds, only with eight legs.

What makes Arachnophobia so special is that the humor doesn't overshadow the horror, making for a sublime creature feature with an outstanding final battle between man and spider.

Easily the greatest killer spider film ever made.

It's every bit as jolly and junky and scary as it wants to be.

A slasher film with spiders doing the work for the masked serial killer, and director Marshall twists that formula around for a diverse audience.

This is one of those films that can be described as a classic B-movie in both the good sense and the bad. Its very much like the film 'Congo' really, exaggerated characters, plenty of creepy moments, elements of hunting mixed with suspense...but all in a slightly comical way, not in an overly serious way. The films title says it all really, playing on the fears that many people have and doing it in bloody good fashion I'll say. One big ugly motherf**ker of a spider hitches a ride from Venezuela and ends up in a small wholesome American as apple pie town. Once there it breeds with the local spiders and creates a whole army of deadly eight legged facehuggers that go on the rampage biting all the lovely townsfolk, how horrific!. Its up to the new doc in town, Jeff Daniels, to save everyone...yeah not good, having Jeff Daniels as you're only hope!. 'A web would indicate an arachnoid presence' Loved the whole scenario of Daniel's new in town City doctor character up against the aged, stuck in the past, doesn't like change, old fashioned methods small town doctor. Brilliantly played by Henry Jones. This film is so darn hokey its fantastic, everything within it it cliched and predictable but that's the way it should be. There are no complaints here, no moaning, this is exactly what was set out to do and you get exactly what you'd expect, tiny aliens invading smallville USA. So yes the main daddy spider is an animatronic laugh out loud effect, they have clearly tried to make him look real but its very obvious looking yet highly cool at the same time. You don't see him too clearly, mainly the legs, but in the final showdown he presents himself (almost) in all his furry glory, hissing and screaming too I might add!. What was impressive about this film was they used real spiders alongside the fake ones. In fact they used lots of real spiders, it makes you wonder how on earth they managed to do it, get the spiders to go where they wanted and create some really decent spine tingling moments. I've read they attract them using cold or heat?? sounds bizarre, but you must admit many shots in this film look terrific as the little blighters scurry around. The more impressive shots are seeing the spiders dangling on their web threads. Of course the winning formula here is the lurking fear factor. The devious fellows behind the film use every trick in the book damn them, things that you dread, that you have nightmares about. Spiders on your face, inside cereal boxes, in you bed, on your hand, in you hair, hanging down from the ceiling on their web threads and hovering above you or landing on your head!, leaping at you, in the shower, inside slippers etc...There's an absolute multitude of moments that will make you jump or squirm involuntary (if you don't like spiders), just the sheer vision of seeing one of these little long legged arachnids spring into action is enough to give me the shits. Its funny how such small little creatures that actually do exist (this ain't no fantasy monster flick) can create such powerful reactions from us. I'm sure some folk would say this is more scary than any slasher/psycho horror flick. Myself, I don't like spiders at all, and this film certainly made me check where my feet were whilst watching. A well made flick that gives you the creeps and also looks really good too, its still B-movie schlock but the wonderful characters, brilliant spider camera work and the full on American cheese is glorious. Kudos to John Goodman as the exterminator, funny character, amusing look and of course completely hammy. 'Actually, he's probably still at the bottom of my shoe. You really can't tell what it is anymore'.

Eight legs, two fangs and an attitude. "Arachnophobia" is a very entertaining horror movie produced by Steven Spielberg. A group of researchers are on a research expedition to Venezuela. Upon a routine trapping of insects, the researchers find two stunned spiders in their traps. They are unlike any spiders they have ever seen, and they begin to study the spiders. One of these spiders escapes, and kills a researcher. Once the researcher is discovered dead, the spider hitches a ride back to the researchers home town, Canaima, California. There, Dr. Ross Jennings has just moved in, and he is deathly afraid of spiders. Now, the Venezuelan spider has reached the U.S., and has begun to dominate the town. Soon, people who appear completely healthy start to die suddenly. It is only after the death of the town's only other doctor, that Jennings realizes it may be a spider that is causing the death. Soon, they attract the attention of the head researcher in Venezuela, Dr. James Atherton. He sends his assistant to Canaima, only verifying that the Venezuelan spider was involved. He informs them that the Venezuelan spider plans on taking over its new area, by creating reproductive offspring with a domestic house spider. Now, it's a race against time before the Venezuelan spider manifests the town and eventually the entire country.

I watched with a Friend who has arachnophobia, still she wanted to watch this Movie very badly. Okay. It wasnt fun for me to hear her scream next to me whenever the Spiders appeared on the Screen and who has seen the Movie it was 95%, so anyone can imagine what Screams I had to suffer. lol Long time ago someone recommended this Movie to me and I didnt actually paid attention, ironically a friend who has Arachnophobia told me to give it a try. Spiders dont bother me at all. It began a tiny bit "suspense" or in this case "oh this is the beginning" but later I noticed it was more "humourous" and not even CLOSE TO A HORROR. The only Horror were the Screams of the Friend during the whole Movie. Jesus Christ I had a headache at the End.

Unless you actually have arachnophobia, it would be hard to really call this film horrific. Frank Marshall (the director) called it a thrill-omedy, and that might be the best description. A little thrilling, a little funny.