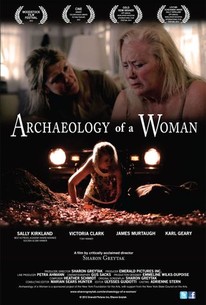 Archaeology Of A Woman Photos

In ARCHAEOLOGY OF A WOMAN, Margaret (Sally Kirkland), a feisty, tormented former newspaper columnist, fights to protect her freedom in spite of the dementia she cannot control. After an episode in a shopping plaza parking lot where she is unable to find her car and is driven home by the police, her daughter Kate (Victoria Clark), an aspiring New York City chef, is beckoned upstate to her mother's aide. While there, Kate develops a romantic tryst with a rookie officer (Karl Geary) as she deals with her mother's demands. Kate attempts to get Margaret involved with activities at the senior center, but Margaret is apprehensive and resentful. Soon, a man from Margaret's past, Sergeant Calder (James Murtaugh), re-enters her life, causing Margaret to fear she will no longer be able to protect herself. Before returning to New York, Kate installs a small surveillance camera to monitor her mom at home revealing a far more private life of fear, lust and longing and her connection to a 30-year-old crime. Through its disconcerting narrative structure, ARCHAEOLOGY OF A WOMAN tells a visceral tale of the unsettled lives of two very different generations of women - one whose secret is buried deep inside her memories, and the other who seeks to dig up the truth. (C) Quad

Will Kresch
as Mall Security Guard

Rebecca Kush
as Physician
View All

Critic Reviews for Archaeology Of A Woman

The patience of the audience - and the characters - is further tried by the leaden pacing, which makes the film feel like it was shot in slow motion.

Ms. Kirkland - a headstrong veteran performer who is nothing if not game - has proved that she can play this kind of role in her sleep. If only the movie around it were worthy of her efforts.

Archaeology of a Woman is a decidedly well-made, unnerving film.

It purports to be an incisive character study dramatized through outré "dream logic," but Sharon Greytak's ineptitude at this very Lynchian aesthetic sucks all nuance and spirit out of the film.

A lot of good intentions and artistic courage went into Archaeology, but they never come together in a coherent whole.

Plot holes aside, Archaeology offers powerful performances from the female leads, who also happen to be incredibly convincing as mother and daughter.

There are no featured reviews for Archaeology Of A Woman at this time.

Archaeology Of A Woman Quotes