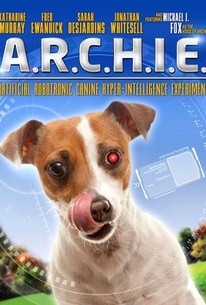 Recently orphaned teen Isabel (Sarah Desjardins) finds a sympathetic friend in a stray terrier, but soon it's revealed that her canine pal is actually an experimental android with enhanced strength and speed, x-ray vision, and the power of speech. Now teen and dog must work together to defeat an encroaching burger franchise and evade an interloper eager to snatch the robot pup.

There are no critic reviews yet for A.R.C.H.I.E.. Keep checking Rotten Tomatoes for updates!

Sometimes, all you need is a completely predictable and generic and outdated talking dog movie, voiced by the legendary Michael J. Fox. You just do.