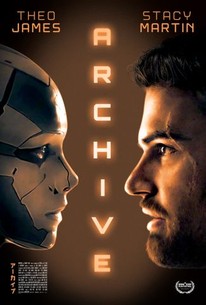 2038. Two and a half years into a three year research contract, George Almore is on the verge of a breakthrough. Stationed halfway up a snow-capped mountain near Kyoto at a secret facility codenamed 'The Garden', he has been working on a model that is a true human-equivalent android. His prototype is almost complete. But this most sensitive phase of his work is also the riskiest. Especially as George has an ulterior motive for his work that must be hidden at all costs: Being re-united with his dead wife, Jules.

Asking what happens if a machine replicates free will so well that it begins to form its own desires contrary to that of its creator, Archive is a unique take on love and loss

Yet somehow, Rothery turns this all around in the last few minutes into something that left me genuinely stunned.

A sleek and satisfying riff on familiar sci-fi themes.

Many changes come at the climax, and they are not all good.

Archive honors the great sci-fi visuals of the past and pushes modern sci-fi a little farther into the future.

Archive is a movie that works as both speculative science fiction and moving human drama. Fans of the genre will note that there's no contradiction in that.

Archive isn't the first time this idea has come to the screen, but it makes for a reasonably compelling, if chilly, sci-fi tale in the mold of 2015's Ex Machina.

With an incredible score by Steven Price, Archive has all of the right science fiction set ups and atmosphere, even if the dynamics are nothing new.

With such a gorgeous world housing so many vibrant emotions, it's a particular frustration that Archive doesn't follow through on any of them.

Though it comprises familiar elements from many other sci-fi movies, this debut feature's appealing visual design and surprising emotional content are ultimately enough to make it worth a look.

There are no featured reviews for Archive at this time.