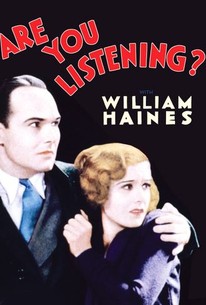 Are You Listening? Photos

"Are you listening?" was the catchphrase of early-1930s radio personality Tony Wons. Though Wons does not appear in the 1932 MGM programmer Are You Listening?, the film is concerned with the burgeoning broadcast industry. William Haines plays a wise-cracking radio writer who is tricked into confessing on the air that he murdered his wife. Whenever an actor normally associated with comedy roles plays a murderer (either actual or implied) in a film, it's usually a sign that his studio contract has come to an end. Such was the case of Are You Listening?, which proved to be William Haines' swan song at MGM, where he'd been employed since 1925. Perhaps as a going-away present, J.P. McEvoy's script contrives to give Haines three leading ladies: Madge Evans, Anita Page and Karen Morley (nobody outside the industry knew that Haines was in fact a homosexual, and MGM was determined to keep it that way).

Critic Reviews for Are You Listening?

A bittersweet Depression-era pre-code drama about the misfortunes of a radio continuity writer.

Audience Reviews for Are You Listening?

There are no featured audience reviews yet. Click the link below to see what others say about Are You Listening?!

Are You Listening? Quotes