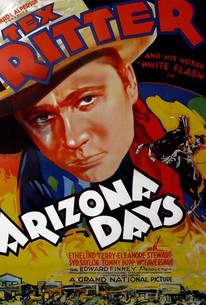 In his third starring Western, former radio singer Tex Ritter played a minstrel performer turned tax collector! During a performance at the Tombstone, Arizona, opera house, Tex Malinson (Ritter) courageously goes up against Harry Price (Forrest Taylor) and his henchmen, who refuse to pay the price of admission. The local sheriff (Budd Buster) is so impressed that he suggests Malinson for the job of tax collector. Price, needless to say, is a major tax offender but Tex and sidekick "Grass" Hopper (Syd Saylor) manage to "convince" him to do his civic duty. In between collecting taxes from town bullies, Ritter performed his own Tombstone, Arizona and High, Wide and Handsome, as well as If Love Were Mine by Frank Sanucci. Salty Holmes, known as "The Harmonica Maestro," performed his specialty of playing two harmonicas at the same time: one with his mouth, the other with his nose, and former Broadway luminary Ethelind Terry played one of Ritter's fellow minstrels. The erstwhile operetta diva's first film since the disastrous Lord Byron of Broadway (1930), it was also to be her last. Producer Edward F. Finney headed a trek to Wilcox, Arizona, for a few scenes, but most of Arizona Days was made at the Brandeis and Garner Ranches in Chatsworth, California.

There are no critic reviews yet for Arizona Days. Keep checking Rotten Tomatoes for updates!

There are no featured reviews for Arizona Days at this time.