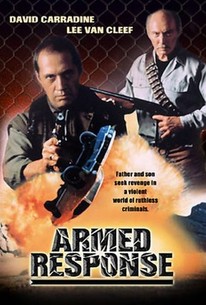 Fred Olen Ray always manages to attract major names to his bargain-basement actioners, and Armed Response is no exception. The scene is Chinatown, where Yakuza boss Mako yearns to get his hands on a stolen jade statue. David Goss, son of retired cop Lee van Cleef and the brother of Vietnam veterans David Carradine and Brent Huff, is hired by Mako to deliver half a million dollars to the crooks who've got the statue. Things go awry, ending in a shootout. Mortally wounded, Goss brings the statue home, at which point a vengeful Carradine picks up the storyline.

Marianne Zvoleff
as Prostitute
View All

There are no critic reviews yet for Armed Response. Keep checking Rotten Tomatoes for updates!

There are no featured audience reviews yet. Click the link below to see what others say about Armed Response!