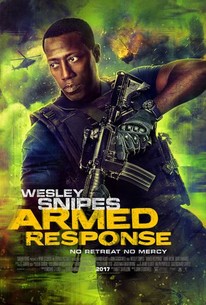 A team of special forces soldiers approach the designer of a high-tech military compound to investigate the disappearance of another team guarding the facility. The compound, known professionally as a Temple, is an artificial intelligence powered facility designed for interrogating high level prisoners. Upon entering the Temple, the soldiers quickly find the earlier team horrifically slaughtered but no evidence as to who is responsible. Almost immediately, the crew begins to experience strange and horrific supernatural phenomena as they attempt to uncover who killed the previous team. Soon enough, they find a lone survivor, a dangerous terrorist who may hold the key to who killed the soldiers. But as the story goes on, we'll learn that there's more to it than we've been told and a dark secret the soldiers share may hold the key to surviving The Temple.

Unfortunately, although there's an opportunity here to do something compelling, that opportunity is largely wasted.

Snipes, for his part, looks bored off his rocker. He barely gets to move, and spends most of the movie looking like he's making to-do lists in his head.

The possibilities are intriguing, but the characters are underdrawn, and the pacing lags.

People start dying, friends turn against each other and the dialogue is almost bad enough to make you keep watching.

By the time one of the gun-toting members of Team Snipes growls "Let's finish this!" viewers would be hard-pressed to disagree.

Armed Response has all the hallmarks of a film that was never fully thought through, and was made on a whim once some rogue investors misguidedly threw some money at the project.

Armed Response doesn't deserve a response for how bad it is, but you should know before you choose to see it.

Unless there's a burning need to see Gene Simmons without hair (it's actually a good look), this is a movie about a prison that feels like prison.

The only real mystery is if Snipes will rebound from this into better projects, or if movies this cheap and uninspiring will be his new normal.

Low-budget high-tech thriller pits grunts against a supercomputer run amok in this too-familiar tale of man against machine.

"It's judged us deserving of punishment! The question is why?," a soldier shouts. Inflicting 93 minutes of intolerable dumbness upon us would be a good answer.

I'm always pleasantly surprised when a movie I was expecting to be a different genre takes a decidedly Horror turn. This is where the pleasant surprises end for Armed Response. You know what I hate? When the shrill elongated beep that's supposed to cause the characters immense pain, actually causes pain to the audience. Well, Armed Response has that in spades. Seriously, have we not yet reached a place in filmmaking where we can indicate an intense noise other than that some bloody headache-inducing, ear-splitting 'EEEEEEEEEEEEE' they all use? Makes me want to turn off the movie immediately. Well, with Armed Response, I probably would have been better served if I had done just that. What a ridiculous 93 minutes that was.