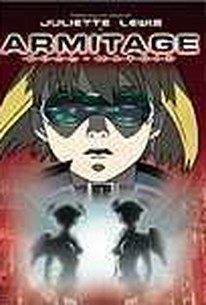 This follow-up to the popular animé feature Armitage III: Poly-Matrix continues to explore human-versus-cyborg relations against a futuristic, super-industrialized backdrop. In the year 2185, six years after the events of the first film, Ross Sylibus has settled down into placid domestic life on Mars with Naomi Armitage, his crime-fighting cyborg partner/love interest from the first film. When riots break out back on Earth, however, Armitage feels compelled to leave her family behind and investigate. What she finds shocks her: At an anti-matter plant, scientists are creating an illegal strain of robot, called "Third Types." Though Armitage herself is a Third Type, she fought against the further creation of these humanoids. Now, she finds she's going to have to take on an army of herself -- genetically engineered clones of herself, that is. English-language versions of this film feature Juliette Lewis as Armitage, replacing Armitage III's English-speaking lead, Elizabeth Berkley. ~ Michael Hastings, Rovi

First-timers won't have much trouble understanding what's going on.

There are no featured audience reviews yet. Click the link below to see what others say about Armitage - Dual Matrix!