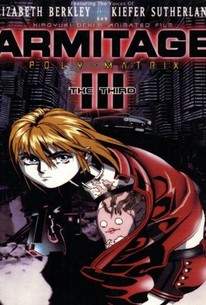 In the year 2046, humankind has discovered that the robots they created so long ago are becoming too strong to control. Fear and mistrust about artificial life is spreading, and the Seconds, the most popular line of robots, are becoming a persecuted race. In the midst of this volatile climate, a rash of murders sends the police into a fierce investigation. Detective Sylibus, a cop who's just lost his partner at the hands of a robot, is assigned to the case, but he's in for a major surprise: his new partner, Armitage, a woman who's just as tough as she is beautiful, is a robot herself. The lines between good and evil, wrong and right, and human and artificial are blurred as both Detective Sylibus and Armitage can't be sure who to trust.

Debbie Rodgers
as Model
View All

Fantastic cyberpunk adventure that focuses on whether machines can feel. So much better than Ghost in the Shell.