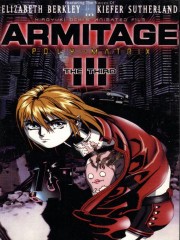 Skyler B
January 22, 2013
I remember this. That is the limit of my commentary.

Kristen R
December 10, 2012
I love Armitage, she is the most kick ass chick that I have seen!

Mike G
½ November 3, 2012
Classic. Must watch for anyone who fancies themselves an fan of Anime.

Kevin S
½ May 1, 2012
Complex and intriguing, tests your views of humanity.

Jan C
March 3, 2012
Since it's a compilation of 4 OVAs, naturally there's a few plot holes, but all-in-all, a FANTASTIC movie and my favorite anime!

Michael S
January 12, 2012
If your A Fan of Cyberpunk this Anime Movie for you.

Chris G
September 11, 2011
just something i picked up at a big lots for $2. figured it would be awesome since it has Kiefer sutherland in it. Though i was satisfied, it couldve been better. and i did reserach and found that this was basically orginally a 4 ep ova condensed into a movie. Eh. i liked it. its worth a rent.

Mel V
June 28, 2010
Re-edited from a 140-minute, four-part OVA (Original Video Animation, essentially a straight-to-video series) into a 90-minute feature film, [i]Armitage III: Poly-Matrix[/i], is a violent, convoluted, messy cyberpunk animé that betrays its derivative nature from the opening scene, a wild shootout in a Martian airport. Even casual science fiction fans will notice the story elements lifted from [i]Blade Runner[/i], [i]Total Recall[/i], and [i]Ghost in the Shell[/i]. Originality is in short supply here. Directed by Takuya Sato from a script by Chiaki Konaka takes too long to introduce the audience to the central conflict or mystery and falters by opting for an unsatisfying guns, explosions, and destruction-filled finale, which inevitably feels overly familiar and routine.

[i]Armitage III: Poly-Matrix[/i] opens as an interplanetary transport ship makes its final approach into a Martian airport. Aboard the transport ship is Ross Sylibus (voiced by Keifer Sutherland), a police detective transferred to Mars (for an unspecified reason). Within moments, Ross is caught in a running gun battle. He?s more witness than participant, since he?s unarmed. Luckily, his new fetish-wearing partner, Naomi Armitage (Elizabeth Berkeley), is on hand to handle the thugs. One blond-haired thug manages to escape, however, but leaves behind an oversized suitcase. Ross and Naomi make a gruesome discovery: the body of a famous country-western singer. To both their surprise, the dead singer is a cyborg. She is, in fact, a third, a third-generation cyborg. Thirds can have emotional lives, but just as importantly, are capable of creating art. They can, of course, blend into the human population. There?s just one problem: thirds are illegal on Mars.

The singer?s death, however, is the first of several, as the blond-haired killer, D'Anclaude, simultaneously targets other thirds and attempts to incite mob violence against them. Ross and Naomi must, of course, stop D'Anclaude, but their investigation inevitably leads to a conspiracy-laden plot, possibly involving the absent head of a research team that built the thirds and government officials with a hidden agenda involving the thirds and the future of Mars. Along the way to uncovering the identities of the power brokers behind the organized destruction of the thirds, Ross and Naomi have a lot of ground to cover, which results in multiple firefights, including a spectacular confrontation outside a research lab involving acrobatic gunplay and massive destruction of government property. D'Anclaude continues to reappear intermittently, taunting Ross and Naomi with his plans and proving himself nearly indestructible in [i]Terminator[/i]-like fashion. The finale confrontation occurs in a parched, desert setting, with Ross strapped into a [i]mecha[/i] suit and Naomi suitably armed with firepower and enhancements of her own (which suggests another, more local, influence, Yukito Kishiro?s [i]Battle Angel Alita[/i]), standing alone against a robot army.

Not surprisingly, Naomi isn?t who she appears to be, and Ross? last case on earth has a tangential relationship, if not to the case at hand, then to his conflicted feelings for and against androids. Ross? conflicted feelings, of course, will be resolved (that?s essentially the extent of Ross? character arc). Takuya Sato and Chiaki Konaka keep the pacing relatively tight, doling out bits of much-needed exposition during breaks from the action scenes, while also giving Naomi?s character space to ruminate superficially about the nature of identity (an issue handled with more delicacy and insight in Mamoru Oshî's [i]Ghost in the Shell[/i]).

The obvious lack of originality, predictable plotting, and a villain dispatched too early in the film makes [i]Armitage III: Poly-Matrix[/i] a difficult animé to recommend. The animation, while above average for OVAs, will likely disappoint audiences expecting theatrical-level quality (they won?t get it). The character designs closely follow animé standards, with the female characters relegated to round-faced, large-eyed, slim-hipped designs. Ross Sylibus surprisingly resembles the late American actor Rock Hudson. Some of the animation lacks detail, but Sato and his animators excel in creating [i]Blade Runner[/i]-like cityscapes. Watching the unedited, four-part OVA may fill in some of the story and logic gaps, but it?s unlikely to resolve all, or even most, of them. Ultimately, [i]Armitage III: Poly-Matrix[/i] is strictly for animé/cyberpunk fans.

Garrett D
½ January 25, 2010
like all movies, you really need to watch it in it's original language to get the full effect, but compared to most movies, this one has a pretty good english dub. The OVA is definitely better, but the movie is still amazing.

Melodi F
November 8, 2009
no where near as entertaining as Ghost in The Shell!

William M
September 4, 2009
I have Dual MAtrix and loved it so I wonder what this one is like

Ewan C
April 25, 2009
One of the first anime series i watched. This is the four parts cut down to one film. I would recommend this to anyone who is getting into anime to give this one a try:)