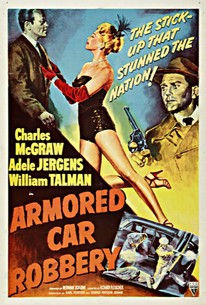 Some auteur critics feel that director Richard O. Fleischer did his best work while laboring in the "B" mills of RKO Radio. Fleischer's minimalist noir exercise Armored Car Robbery stars William Talman as the chief crook and Charles McGraw as the detective dogging his trail. A shade smarter than his gang underlings, Talman manages to elude capture, and even travels freely about in the company of his flashy lady friend Adele Jergens. But McGraw's persistence eventually pays off. Don McGuire, later a prolific TV producer/director, provides a welcome touch of comic relief as McGraw's rookie-cop assistant. A powerful (and slightly gruesome) climax caps this low-budget gem.

Lean, mean and too the point. Armored Car Robbery skips along at a brisk 68 minutes and gives you everything you need and nothing you don't. As a far as heist films go, it's not the best, but for complete-ists its a must.

Armored Car Robbery is an unimaginative title to a pretty good heist movie. Its full of parts that would trickle down to other heist movies like The Killing all the way down to Heat. Its noirish at times but mostly its a quick and to the point heist picture.