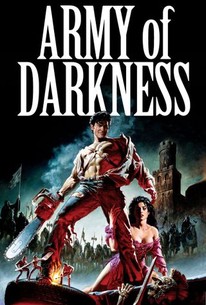 Critics Consensus: Army of Darkness is a madcap adventure worth taking thanks to Bruce Campbell's hammy charm and Sam Raimi's acrobatic direction, although an intentional lack of shocks make this a discordant capper to the Evil Dead franchise.

Critics Consensus: Army of Darkness is a madcap adventure worth taking thanks to Bruce Campbell's hammy charm and Sam Raimi's acrobatic direction, although an intentional lack of shocks make this a discordant capper to the Evil Dead franchise.

Critic Consensus: Army of Darkness is a madcap adventure worth taking thanks to Bruce Campbell's hammy charm and Sam Raimi's acrobatic direction, although an intentional lack of shocks make this a discordant capper to the Evil Dead franchise.

The third in director Sam Raimi's stylish, comic book-like horror trilogy that began with The Evil Dead (1982), this tongue-in-cheek sequel offers equal parts sword-and-sorcery-style action, gore, and comedy. Bruce Campbell returns as the one-armed Ash, now a supermarket employee ("Shop Smart...Shop S-Mart") who is transported by the powers of a mysterious book back in time with his Oldsmobile '88 to the 14th century medieval era. Armed only with a shotgun, his high school chemistry textbook, and a chainsaw that mounts where his missing appendage once resided, the square-jawed, brutally competent Ash quickly establishes himself as a besieged kingdom's best hope against an "army of darkness" currently plaguing the land. Since the skeleton warriors have been resurrected with the aid of the Necronomicon (the same tome that can send Ash back to his own time) he agrees to face the enemy in battle. Ash also finds romance of a sort along the way with a beautiful damsel in distress, Sheila (Embeth Davidtz), and contends with his own doppelganger after mangling an important incantation. ~ Karl Williams, Rovi

News & Interviews for Army of Darkness

View All Army of Darkness News

Critic Reviews for Army of Darkness

Army of Darkness' story is so perfunctory and lame that there's nothing to tether its bits and pieces of loopy madness.

This is old-fashioned fun until the climactic battle, which almost comes across like routine bone piling after all the flights of fancy.

The movie isn't as funny or entertaining as Evil Dead II, however, maybe because the comic approach seems recycled.

The movie's insistence on pushing horror to the side in favor of sheer goofiness was a risk, though, and perhaps that's why Army of Darkness is more of a cult classic.

Hilarious and unexpectedly adventurous, this horror/comedy is like Indiana Jones meets Sinbad in the three worlds of Gulliver.

The climactic battle between the living and the dead that closes the picture is well done yet disappointingly lacking in thrills...

Only a primitive screwhead would find zero entertainment value in the third Evil Dead movie.

More than anything, Army of Darkness is a tribute to the Ray Harryhausen adventure epics (Clash of the Titans, Sinbad, and the like) that Sam Raimi grew up loving.

Sam Raimi's Army of Darkness delivers a great conclusion to what is one of the most unique trilogies in cinema history, providing a ton of laughs and plenty of exciting action in the process.

A loopy work of imagination that never fails to be entertaining.

Works in being a spooky and entertaining darkly comedic horror movie...

Raimi turns his back on the horror genre that brought him fame in the first place and delivers instead a cartoonish sword-and-sorcery fantasy, albeit one with some pretty cool monsters and special effects.

Audience Reviews for Army of Darkness

It is sillier compared to the previous Evil Dead movies and clearly made for a younger audience, but even if it loses steam after a while, it benefits from those moments of hysteria and absurdity that made the second movie so funny, with Bruce Campbell screaming out of control.

First off, this review is based on the unrated director's cut. I had seen the theatrical cut years ago and to say I loathed the finished product is an understatement. With the added value of hindsight and a new, unfiltered version of the film, I can safely reassess the film and declare it to be the same drek as before. Of course, the 'Evil Dead' trilogy has metamorphosed and retconned from a gruesome splatter flick to a fish-out-of-water farce in this entry. I've never been a huge fan of anachronistic humor and scenes of Bruce Campbell bewitching the humbled medieval citizens with tales of his "boomstick" shotgun don't persuade me in favor of it any further. Quite honestly, Bruce Campbell's self-deprecating overacting is too overblown and one-dimensional for belief (he is abused by a variety of malevolent spirits and demon hordes). For the majority of the film, Ash is a chauvinistic jerk (Sheila slaps him and a moment later, he arrogantly asks her to "give me some sugar"). In most of Raimi's films, the aesthetics can be stirring, but the shaky-cam she-bitch confrontations are gusty eyesores. Comedy is subjective but the acrobatic Three Stooges slapstick with the Lilliputian Ash clones is tremendously unfunny and it should've been excised entirely. At one point, the Necronomicon book assaults Ash and it is the umpteenth variation on the Passion of Ash. This is a meretricious parody of what the 'Evil Dead' series has become and even the foul 2013 remake is superior.

Picking up where Evil Dead 2 left off, Ash finds himself trapped in the Middle Ages, still fighting it out with the undead. This film is a slapstick comedy gem. The only 'horror' element to it is the undead, that's it. The rest is all silly, goofy, physical comedy fun. It's not really my cup of tea, as I would have preferred a little more darkness and seriousness, but the humor is done decently well. I'm mostly a supporter of this film because it's a sequel to two great films, and was one of the last bits of mainstream film I can think of to feature great use of stop motion. Sure, it's not as gory as the others, and it ain't scary, but I think that could have taken it in a far worse direction than this. Give it a shot. It's not what I was hoping for, but it still manages to be a decent time anyway, so that really says something.