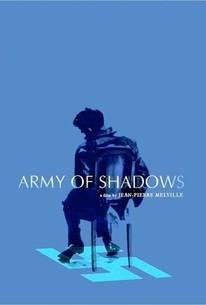 Critics Consensus: Originally made in 1969, this recently reissued classic is a masterful examination of the inner workings of the World War II resistance efforts.

Critics Consensus: Originally made in 1969, this recently reissued classic is a masterful examination of the inner workings of the World War II resistance efforts.

Critic Consensus: Originally made in 1969, this recently reissued classic is a masterful examination of the inner workings of the World War II resistance efforts.

In this war drama set during the French Resistance of WW II, a courageous fighter escapes Gestapo headquarters and returns to Marseille. There he and his gang capture a traitor and throttle him. They then try to rescue a Resistance fighter in Lyons. As they do so, the hero is again captured and his partner killed. Again the hero escapes just before he is executed. He then finds that a female partner has been captured. To avoid having her daughter forced to work in a Nazi brothel, the woman has informed upon the others. She is then released and subsequently killed by another Resistance fighter for revenge. The screenplay is based on Joseph Kessel's novel and became filmmaker Jean Pierre Melville's magnum opus. ~ Sandra Brennan, Rovi

Watch it a hundred times and the dread, bad-dream opening sequence of Nazi troops swarming through the Arc de Triomphe might still leave you reeling...

"Jean-Pierre Melville cherishes paradox and free thinking," and both elements are on beautiful display in his masterpiece.

As close to a masterpiece as any film you're likely to see this year.

A film to be seen and savored for its moral magnitude.

From the first sight of German soldiers goose-stepping past the Arc de Triomphe to a postscript that spells out the fate of characters whose moral confusion is all too real, Army of Shadows is a movie of its time -- and ours.

Unlike the romantic images of freedom fighters perpetuated by the popular media, Melville's movie is stripped of self-congratulatory hero worship and other puffery.

The greatness of Army of Shadows comes from the way it is able to convey many of the cruel paradoxes of war. What is an intimate and messy affair for some ends up being a remote and tactical exercise for others.

one of those blessed pictures in which all elements, from its writing through to its editing, coalesce into a work of profound philosophical and emotional unity

As bleak as it is compelling, it will leave you wondering if these freedom fighters haven't done more damage to each other than they have to the Nazi aggressors.

Rich in the elegance, assurance and quasi-formality that often define Melville's style.

The French Resistance is where this examination begins but there's not a single scene showing a train being blown up or lines being furtively cut in the dead of night ... rather it's a look at the interior damage wrought when choosing to resist tyranny at all, the isolation, the loneliness, the agonizing fear of trusting yourself. Must see.

Unembellished and matter-of-fact. Melville masterfully spotlights the French Resistance without martyring the Nazi regime that spawned it.

a great depiction of french resistance, melville blends substance with his usual stylistic approach. the film falters at many points with a lack of clarity and direction to the shifty plot, and the film is almost entirely without emotion, but it has striking images and flawless direction in its portrayal of horrific events. overall very good film.

Heroism to Melville isn't the pretty picture Hollywood gives us in its' sanitized war films. This is a grim film where those pursuing a noble cause don't have the opportunity to even enjoy it as they must be prepared for the possible worst. Melville's filmmaking style is slow and deliberate giving the viewer an anti-heroic account of the early days of French resistance to the Nazi Occupation which is both restrained and terrifyingly tense.