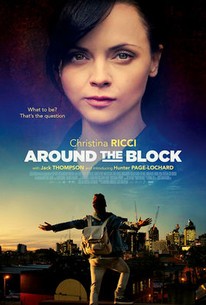 Around The Block Photos

Around the Block is the story of American Dino Chalmers (Ricci) - an edgy and charismatic drama teacher with a passion for Shakespeare. When the opportunity arises for her to work at a school in inner Sydney, she embraces the chance to introduce the magical world of theatre as an alternative to life on the tough streets of Redfern in Sydney, Australia. The film centers on the developing relationship between Chalmers and Liam (Page-Lochard), a sixteen-year-old urban Aboriginal student who lives around the block in Redfern and earns the lead in her production of Hamlet. As Chalmers presents Liam with a possibility of a life without drugs and violence, he must choose between pursuing his newfound dream of performing or following his family into a cycle of crime. (c) Random

Marcello Fabrizi
as TV Journalist at the Block

News & Interviews for Around The Block

Critics Consensus: Guardians of the Galaxy is Certified Fresh

View All Around The Block News

Critic Reviews for Around The Block

The film's musty premise, about a novice instructor trying to deter an Aboriginal student from crime with Shakespeare, renders it the cinematic equivalent of warmed-over soup from the school cafeteria.

Every single development in the Wood family's plot trajectory is telegraphed, and these actors deserve to be in a less emotionally bogus drama.

'Around the Block' may have its exasperating flaws, but it cannot be accused of not having its heart in the right place.

Appealing performances, a few tweaks to the clichés of the inspiring-teacher genre, and a sincere desire to counter outrageous racism go a long way toward making this worth a look.

Hamlet In The Hood. Petite Christina Ricci displays a big heart, as a teacher in touch with her inner maternal instinct. And disaffected Aboriginee teens dramatizing in a culturally conscious production, the alienation at the heart of Hamlet, who knew.

There are no false notes here, and there is no whitewash, either (if you'll pardon the expression); it's a good story well told and beautifully performed, supported by a contempo soundtrack and seamless design. Australian cinema at its be

All the cast is excellent with special mention to Matt Nable, whose minimalist performance as Liam's criminal father is outstanding, providing the film's emotional highlight

Audience Reviews for Around The Block

There are no featured audience reviews yet. Click the link below to see what others say about Around The Block!

Around The Block Quotes