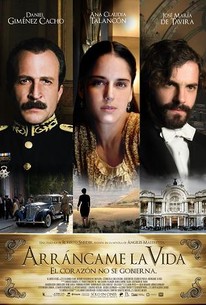 A husband with sweeping political ambitions and his outwardly docile wife ultimately use one another as means to an end in this lavish, epic period drama from Mexico, that unfurls in 1930s and '40s Mexico, just after the Mexican Revolution. Though Catalina Guzman (Ana Claudia Talacon) was born into a rural family that suffers from abject poverty, she sees a way out via a long-term relationship with the conniving, calculating general Andres Asensio (Daniel Gimenez Cacho). Asensio's aspirations extend far beyond the confines of the military: he ultimately plans to work his way up to the Mexican presidency. In need of a wife (in part to make his own personal life complete and paint an excellent picture for the public), he beds Catalina before she reaches her 16th birthday, and marries her soon after. Dark clouds soon appear on the horizon in the form of scandals from Asensio's personal life, including time spent in jail for murder and the revelation that he's a philanderer who has fathered children by multiple women, but this doesn't seem to phase Catalina. She seems completely unfazed by all of this, but as it turns out, Catalina has a few agendas of her own.

Critic Reviews for Arráncame la vida (Tear This Heart Out)

While everything looks fabulous and the narrative - based on the novel by Angeles Mastretta - is engaging to a point, there's a sense that we're only getting part of the story.

Audience Reviews for Arráncame la vida (Tear This Heart Out)

Lately, there haven't been a lot of Mexican films worthy of bragging about, but thankfully, ARRANCAME LA VIDA is here to fix that. The most expensive film in the history of Mexican cinema, and one of the best of the last decade, this amazing period piece is very close to becoming a classic. The music, costumes and visual elements are exquisite. The script is sharp, and it's also very funny when it has to. Which brings me to the highlight of the film, one of my favorite actors, Daniel Gimenez Cacho. His performance is great, successfully blending General Ascencio's charismatic exterior with his shady, mean personality. Ana Claudia Talancón is stunningly beautiful and also gives a strong performance. Her transition from naive teenager to a powerful woman is very convincing. The style of the film reminded me a little of another favorite film of mine, Atonement.

First off, I'm not a fan of Ana Claudia Talancón and have always believed she has little (no) talent, so it was hard for me to follow her character throughout the movie. Then, the story seemed to compress too much in too quickly and didn't flesh out and almost everything seemed to happen just because. It does have nice costumes, a very good performance by José María de Tavira, it's surprisingly (intentionally, that's the surprise) funny and does have some very beautiful scenes.