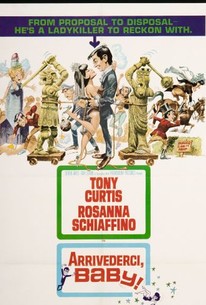 A handsome charmer sets out to make a fortune by marrying and murdering a succession of wealthy women in this inconsistent dark comedy. The man's plan proves a great success, until he hooks up with a female counterpart who is carefully planning a murder of her own.

John Fordyce
as Boy in Orphanage

Withal, Curtis does a very good job, plotting with Lionel Jeffries to do in Schiaffino.

Tony Curtis -- and about time -- has finally got himself a good comedy in Arrivederci, Baby!

An underrated trifle in [director Ken Hughes'] career, offering a bravura role to the terrific Tony Curtis, as a charming Bluebeard, and some plum lines and opportunities for grimacing to the irascible Lionel Jeffries.

The whole affair leaves a bad taste in one's mouth.

At some point in the swinging mid-60's, nothing was cooler than being an Italian sex bomb. What happened to our culture that THAT went by the wayside?!? In any case, Tony Curtis plays his typical ladykiller conman scheming to get to the fortunes of rich widows, until he meets his match with (gulp!) forgotten sex bomb Rosanna Schiaffino (who might've been #5 on the list of ltalian starlets with oomph behind Sophia, Gina, Claudia, Sylvia ... it was a cottage industry back then). Nothing serious going on here but light entertainment, for which it performs it's job without much fuss. European locales nearly lead me to suspect the tourist industry producing these films to boost cruise ship sales. Lionel Jeffries looks happy merely to be working. Like playing with a puppy or a kitten, cute fun.