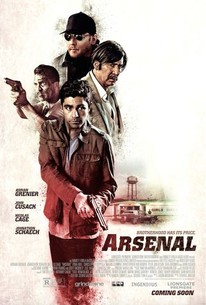 Critics Consensus: Aside from an opportunity to watch a mustachioed Nicolas Cage acting from under a wig and behind a prosthetic nose, Arsenal has depressingly little to offer.

Critics Consensus: Aside from an opportunity to watch a mustachioed Nicolas Cage acting from under a wig and behind a prosthetic nose, Arsenal has depressingly little to offer.

Critic Consensus: Aside from an opportunity to watch a mustachioed Nicolas Cage acting from under a wig and behind a prosthetic nose, Arsenal has depressingly little to offer.

A powerful action thriller, ARSENAL tells the intertwining stories of the Lindel brothers, Mikey (Johnathon Schaech) and JP (Adrian Grenier), who had only each other to rely on growing up. As adults, JP found success as the owner of a construction company, while Mikey became a small-time mobster, mired in a life of petty crime. When Mikey is kidnapped and held for a ransom by ruthless crime boss Eddie King (Nicolas Cage), JP turns to the brothers' old pal Sal (John Cusack), a plain clothes detective for help. In order to rescue his brother, JP must risk everything and unleash his vengeance against King's relentless army of gangsters.

Hidden Figures and A Monster Calls Are Certified Fresh

The only thing that is less convincing than Cage's prosthetic schnozz is the car crash of a plot.

Nicolas Cage delivers one of his all too frequent cringe-making, extra-screamy, dial-a-psycho performances in this ultra-violent Southern noir.

The combined charms of Nicolas Cage and John Cusack might just have been able to save this made-for-VOD thriller, but they are both left on the sidelines.

"You could argue that, at this point, [Nicolas Cage] is to 21st-century VOD fare what Wings Hauser was to '80s direct-to-video quickies."

The rest of Arsenal is dull, so why wouldn't Nicolas Cage be, too? Arsenal will make you see red, but never intentionally.

Is there a better way to ring in a new year of movies with some more material to add to the Nicolas Cage 'Losing His S*** Montage'?

Whose film career is going downhill faster -- John Cusack's or Nicolas Cage's? It's a good question, and one that the truly wretched drugs thriller Southern Fury (US title: Arsenal) gives us far too much time to consider.

Bad acting and even worse facial prosthetics are the main talking points of Steven C. Miller's crime-thriller, Arsenal; a dreary drama about one man's attempt to rescue his loser of a brother from the hands of the mob.

This generic, surprised-it-has-a-theatrical-release endeavour abides faithfully, and affectionately to the tropes of the genre, eventually turning in to your archetypal revenge plot narrative.

The kind of film that serves only to add to YouTube supercuts of Cage freaking out.

It's smattered with gore and overacting, and ultimately good for nothing.

Unfortunately this was a dull and predictable movie that seem intent on doing nothing more than showing how far Nicholas Cage has sadly fallen.