The Art of Being Straight2008 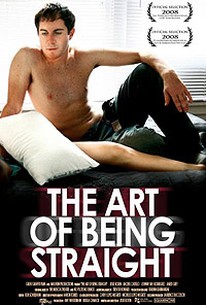 The Art of Being Straight Photos

Officially broken up with his girlfriend and looking for a fresh start in Los Angeles, a young and good-looking photographer finds his life turned upside down after he winds up in bed with a successful male executive in director Jesse Rosen's warmhearted tale of one man's search to discover his true identity. John has always had a way with the ladies, so when he relocates to Los Angeles to live with his old college roommate Andy, it doesn't take long for the old friends to fall back into the familiar pattern of trash talking and womanizing. Initially taken aback when his ex-girlfriend Maddy introduces him to her new girlfriend, Anna, John soon finds himself falling into a homosexual relationship of his own after landing a job at a posh L.A. ad agency.

Dana May Salah
as Renee

Critic Reviews for The Art of Being Straight

Smart without being smart-alecky, Mr. Rosen's writing avoids the aggressive cleverness and gummy politics of many similarly themed movies, focusing instead on realistic dialogue and low-key interaction.

The title is the cleverest thing about this minor indie portrait of sexual confusion.

A low-key comedy high on charm and credible twentysomething observation.

Being straight is hard to do in this brief, ponderous mumblecore flick.

The psychologically flat script isn't nearly up to the task of depicting the pleasure within confusion/despair (or vice versa); neither are Rosen's acting chops.

Structured like a comedy, but outfitted with only the most tedious sexual-identity riffs, generic characterizations, and no singular point of view.

Mildly engaging with an initially intriguing premise and brief moments of wittiness, but ultimately falls flat as a drama. Its bland protagonist, along with a lazy, unimaginative screenplay, leaves you feeling unmoved and underwhelmed.

The director's inexperience shows at times...but his writing and acting are fine. Indeed, everyone in the cast is quite good.

Audience Reviews for The Art of Being Straight

With surprisingly good acting and a smart script, The Art of Being Straight takes a nuanced approach to young adults' struggles with sexuality issues. The film failed to significantly grapple with issues of how the other people in the characters' lives might react and the impact of that reaction, which is unfortunate because it leaves the film feeling incomplete. Nevertheless, the film is funny, intelligent and well worth watching.

This starts off well enough but quickly devolves into meaningless scattered scenes until it abruptly ends in a sort of non ending.

The Art of Being Straight Quotes