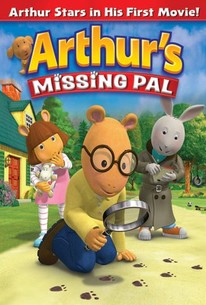 Arthur, the youthful aardvark whose adventures have been the basis of a series of successful children's books by Marc Brown and a popular animated series on PBS, gets a new look in this computer-animated feature for the whole family. Arthur (voice of Carr Thompson) is thrown for a loop when his pet dog Pal goes missing. With the help of his best friend Buster Baxter (voice of Daniel Brochu), Arthur turns private eye as he tries to track down the missing pooch. Their adventures send Arthur and Buster on a wild goose chase that takes them all over town, including a trip through a shuttered ice cream plant. But is it possible that Pal hasn't run away after all? And why is Arthur's sister D.W. is such a grumpy mood lately? Arthur's Missing Pal was the first feature-length story starring the Arthur characters, and the first time Arthur and his pals have been rendered in three-dimensional digital animation rather than the conventional pen-and-ink process.

There are no critic reviews yet for Arthur's Missing Pal. Keep checking Rotten Tomatoes for updates!

There are no featured audience reviews yet. Click the link below to see what others say about Arthur's Missing Pal!