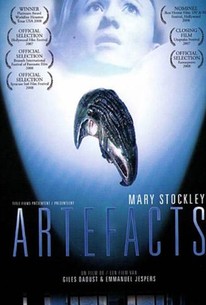 A workaholic woman in her late twenties must reunite with her embittered ex-boyfriend when her friends all start falling prey to murderous mirror images of themselves in this horror film co-written/produced/and directed by Giles Doust and Emmanuel Jespers. All that Kate Warner has time to focus on at this point in her life is her struggling startup, and as a result she is forced to part ways with longtime boyfriend Mike (Felix Scott). But lately Kate's friends are dropping like flies, apparently at the hands of their own doppelgangers. Upon discovering that each of her friends had a metallic "artifact" implanted in their chests just before being killed, Kate realizes that she and Mike may be the next to go. Now, if they can only put aside their differences long enough to find out what's really going on, Kate and Mike may stand a chance of staying alive long enough to solve the murderous mystery that now threatens their very lives.

Peter Warnock
as The Doctor
View All

There are no critic reviews yet for Artifacts. Keep checking Rotten Tomatoes for updates!

Not the greatest flick out there. The acting was bad...but the story was pretty interesting. Very slow-paced, but gets a little more entertaining as it goes.