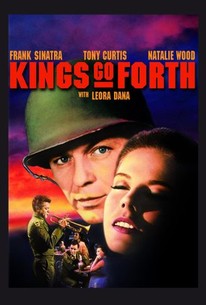 Adapted by Merle Miller from the novel by Joe David Brown, Kings Go Forth stars Frank Sinatra and Tony Curtis as, respectively, a tough army lieutenant and a cocky radio operator. Serving in Southern France during World War II, Sinatra and Curtis vie for the affections of mademoiselle Natalie Wood. Upon learning that Wood's father was black, both men succumb to their inbred prejudices. Sinatra manages to overcome his latent bigotry, but Curtis does not. In fact, he's so vocal in his race hatred that audiences are virtually cheering for his inevitable demise. After the war, Sinatra, who has lost an arm in combat, relocates Wood. The film ends ambiguously, possibly because miscegenation was still a touchy topic amongst Hollywood censors. Kings Go Forth was universally popular - except, perhaps, with those ex-GIs who were still resentful that Frank Sinatra had in real life been spared wartime service due to a questionable physical ailment.

Jimmy Weible
as Guitar
View All

Critic Reviews for Kings Go Forth

The wartime material is fairly standard (if well-executed), but the simmering theme of racism is honestly handled, and Sinatra is excellent.

[A] well-acted drama of love and war.

Kings Go Forth is just more proof that Daves remains one of the most crucially overlooked directors of the classic Hollywood studio system.

Audience Reviews for Kings Go Forth

There are no featured audience reviews yet. Click the link below to see what others say about Kings Go Forth!