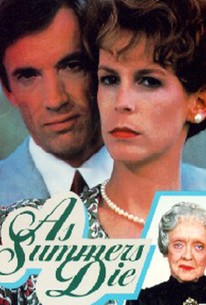 As Summers Die was produced as an "HBO Premiere" attraction. Set in the segregationist South of the 1950s, the film pits the wealthy but decadent members of a landed-gentry white family against a feisty old black woman, on whose property oil has been discovered. Idealistic attorney Scott Glenn bucks the family--and the inbred prejudices of the community--to protect the woman's interests. He finds himself with two unsuspected allies in the forms of young Jamie Lee Curtis and ancient Bette Davis, two "renegade" members of the very family that wants to grab the oil-rich land. As Summers Die had its cable-TV debut on May 17, 1986.

Danny Nelson
as Burt
View All

Critic Reviews for As Summers Die

There are no critic reviews yet for As Summers Die. Keep checking Rotten Tomatoes for updates!

There are no featured reviews for As Summers Die at this time.