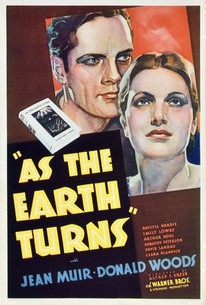 As the Earth Turns Photos

Based on the best-selling Gladys Hasty Carroll novel of the same name, As the Earth Turns covers four seasons in the life of a Maine farming family. Jean Muir stars as Jen Shaw, daughter of dirt-poor farmers Mark and Min Shaw (David Landau, Dorothy Appleby). Jen's parents have an abiding distrust for their new neighbors, the Jankowskis -- not only because they're first-generation Poles, but also because they used to live in faraway Boston. Despite Mark and Min's opposition, Jen falls in love with Stan Jankowski (Donald Woods), but trouble looms in the form of Jen's stepsister Doris (Dorothy Appleby), who also has designs on Stan. New Warners contractee Jean Muir acquitted herself well in her first major role, which may be why As the Earth Turns did slightly better than expected at the box office.

Critic Reviews for As the Earth Turns

'As The Earth Turns' is overall enjoyable. The digital restoration is an impressive piece of work and the new score adds to the visuals.

[It] caught some elements of story and atmosphere, yet failed to reproduce the novel's meaning.

There is a certain serious fidelity about the picture which makes it ring true. For almost the first time, you see a group of actors pretending to be farmers, and they actually manage to make it seem credible.

Audience Reviews for As the Earth Turns

There are no featured audience reviews yet. Click the link below to see what others say about As the Earth Turns!

As the Earth Turns Quotes