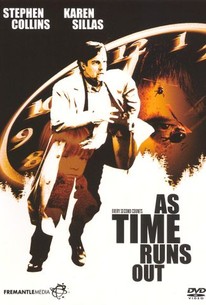 In this most recent spin on a familiar suspense-movie plot device, the 6-year-old son of wealthy Seattle industrialist Dan Carlin (Stephen Elliott) is kidnapped by a disgruntled ex-employee. Innocently unaware of his plight, the captive boy is locked in a room with his toy teddy bear, which has been booby-trapped with a time bomb. Tension mounts when the kidnapper is accidentally killed, leaving Carlin and a dedicated police detective (Karen Sillas) with less than 24 hours to locate both boy and bomb. As Time Runs Out made its CBS network debut on October 5, 1999.

Andrew Airlie
as Doctor
View All

Critic Reviews for As Time Runs Out

There are no critic reviews yet for As Time Runs Out. Keep checking Rotten Tomatoes for updates!

There are no featured reviews for As Time Runs Out at this time.

As Time Runs Out Quotes