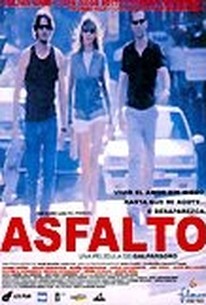 Noted Basque-born director Daniel Calparsoro spins this high-octane crime thriller set in Madrid. The film opens with a violent car wreck witnessed by stunning Lucia (Najwa Nimri) and her thuggish boyfriend Chino (Gustavo Salmeron). Just before Chino, Lucia, and their buddy Charly (Juan Diego Botto) rob a wealthy Frenchman at gunpoint, the couple makes noisy love as their pal looks on. The rich man gets shot in the process of the robbery. Thinking that they killed him, the three promptly flee. Meanwhile, Chino's elder cop brother Antonio (Alfredo Villa) tries to steer his rebellious sibling toward the straight and narrow -- until Chino finally gives in and tips off the cops about a drug deal between Charley and a crime boss. This film was screened at the 2000 Berlin Film Festival. ~ Jonathan Crow, Rovi

There are no critic reviews yet for Asfalto. Keep checking Rotten Tomatoes for updates!

There are no featured audience reviews yet. Click the link below to see what others say about Asfalto!