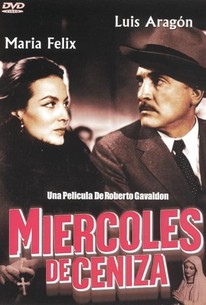 Though Miercoles de Ceniza was released in English-speaking countries as Ash Wednesday, it bears no relation to the much-later Elizabeth Taylor vehicle of the same name. Virtually plotless, the film is a paean to the pomp, ceremony and splendor of the Catholic Church, as seen through the eyes of individual parishioners. The cinematography of Agustin Martinez Solares is superb, even when very little is going on. And the presence of Maria Felix and Arturo de Cordova in the cast assured the film a respective box-office take, despite its overall lack of a storyline. American distribution of Miercoles de Ceniza was hampered by the talkiness of the script, which required more than the usual alottment of subtitles.

Rodolfo Landa
as The rapist

There are no critic reviews yet for Ash Wednesday. Keep checking Rotten Tomatoes for updates!

There are no featured reviews for Ash Wednesday at this time.