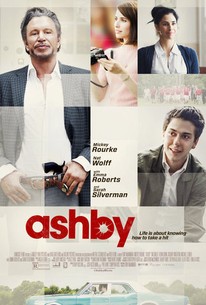 When new kid in town Ed Wallis is given an assignment to interview an older person, he turns to his mysterious neighbor, Ashby Holt for help. That new connection leads to unexpected journeys for both of them, as Ashby - who turns out to be a retired CIA assassin - deals with a terminal prognosis, and Ed deals with adjusting to life with his newly single mom and developing relationship with a brainy classmate, Eloise.

Jason A. Davis
as Mr. Mark

Hilda Freeman
as Principal
View All

The Intern Is Charming But Slight

Folks buying a ticket to Ashby hoping to see a film about the late-great director of Being There and Harold and Maude are about to be sorely disappointed. So is everyone else.

It's a quirky life-lessons setup that, while occasionally earning deadpan laughs, tries for but never achieves Wes Anderson's patented mixture of the archly witty and the sneakily emotional.

It's a comedy afraid of being too funny lest its macho sentimentality seem even more ridiculous than it is, and a drama afraid of appearing too serious lest you dismiss it as hogwash.

A winning film about reconciling one's self-image with reality.

It's Wolff and Rourke who have to carry the load, and for the most part they do.

Ashby has occasional heartwarming moments but isn't well-rounded enough to understand its own journey.

While a pleasing attempt at a feature debut, it's hard to imagine Ashby will have too much staying power past its theatrical release.

Despite the many winding roads it goes down, Ashby is funny throughout and easy to watch.

Women can't teach boys to become men, so the reformed assassin has become the potential (movie) ticket to seeing a satisfactorily performed forging of a boy into a real man.

A genre-blending adventure which somehow successfully combines elements of the coming-of-age and last hurrah formulas.

Watching this movie, the thing that sticks out most in my mind is the fact that goddamn if Mickey Rourke isn't a great fucking actor. Not trying to suggest that Nat Wolff isn't good in this movie either, because he is, but it's obvious that Mickey Rourke is the character that holds this movie together. I just can't imagine what this movie would've been like without his character. It wouldn't have been a bad movie, not at all, but it would've just lost something. It would've certainly lost its most interesting character, for sure. And I'm not even saying that Ashby's inclusion helped make this film different from all the indie-comedies like this out there, because it wasn't what I would call a completely unique movie. It's your typical new kid in town indie flick. He struggles to make friends, neither of his parents aren't there when they really need him, so he befriends an older person that turns out to be a former CIA hitman. Well, I mean, not every one of those films go like that, but you've seen similar movies, where two very different people start a friendship out of mutual needs. I already mentioned Ed's motivations for wanting a friend. Ashby is, essentially, looking for redemption after coming to regret the very last person he killed But the film is certainly solid, like I enjoyed watching this movie. But that's mostly because of Mickey Rourke and Nat Wolff having strong enough chemistry to carry a lot of the load. The scripting itself isn't great, I don't know if I made that clear already, but the writing and the narrative is a little predictable and generic. There's no real problem with the former every once in a while. For example, The Fundamentals of Caring is a perfect example where predictability and adherence to indie comedy formula didn't really hurt the film a lot. I feel that if you have a really strong script, in terms of dialogue at least, and a cast that's into the material then I feel that they can elevate the film past its limitations. This isn't exactly that movie, because I don't think the dialogue is truly great and it's not like Mickey Rourke and Nat Wolff have the chemistry of, say, James Franco and Seth Rogen. They do elevate the film, somewhat, past its limitations, but I still wouldn't call it a completely good movie. It was certainly on its way there, but it just never quite reached that level. This is another one of those films where quarter ratings would be beneficial. This is a two and three-quarter star movie if I ever saw one. Eh, it is what it is, but the rating doesn't necessarily reflect that. It's certainly better than average, but it's not a good movie. The good performances simply weren't enough to overcome for a predictable and generic script. It's not bad, not even close, but it should've been better considering how great Mickey Rourke is in this movie. Wouldn't recommend it, but it's on Netflix, so you could do considerably worse.