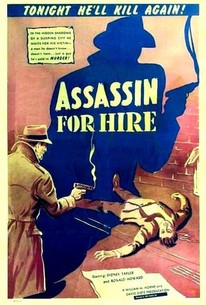 Long before it concentrated on its series of Edgar Wallace mysteries, the British Merton Park studios cut its teeth on taut little home-grown melodramas. Assassin for Hire stars Sydney Tafler as Antonio Riccardi, a professional killer who has long managed to elude the law. Inspector Carson (Ronald Howard) is determined to bring Riccardi to justice, but has no evidence to work with. In a peculiar twist of fate, Riccardi is brought to heel by a crime he didn't commit. Beyond its better-than-usual production values, Assassin for Hire permits us a glimpse at Ronald Howard impersonating a detective several years before starring in the Sherlock Holmes TV series. ~ Hal Erickson, Rovi

Ewen Solon
as Fred
View All

Critic Reviews for Assassin for Hire

There are no featured reviews for Assassin for Hire at this time.