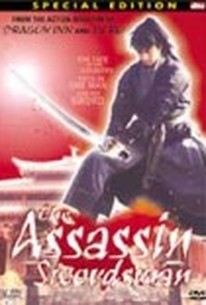 The quest for a mythical book that will give its holder the power to rule all of China sparks a deadly duel between a powerful samurai and a menacing eunuch in this martial arts-adventure from renowned action director Ching Siu Tung. According to legend, the Book of Tai is buried deep in the tomb of the first Ming Emperor. The only means of entering the tomb to retrieve the Book of Tai is to first obtain the three keys that will unlock the tomb and all of the riches within. As a Japanese Samurai and a nefarious East Chamber Eunuch locks swords to see who will ultimately gain possession of the keys, the fate of China hangs in the balance. ~ Jason Buchanan, Rovi

There are no critic reviews yet for Assassin Swordsman. Keep checking Rotten Tomatoes for updates!

There are no featured audience reviews yet. Click the link below to see what others say about Assassin Swordsman!