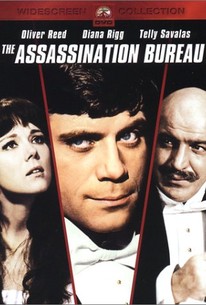 The Assassination Bureau is loosely based on a turn-of-the-century yarn written by Jack London. Nellie Bly-style girl reporter Sonya Winter (Diana Rigg) tries to get the goods on shady businessman Ivan Dragomiloff (Oliver Reed). Ivan is in charge of a wide-reaching organization which, for a price, assassinates those who "need killing." As a challenge, Sonya offers to pay Ivan a huge sum if he'll instruct his minions to assassinate him; Ivan agrees, hoping that it will put a little kick in his work. Despite his profession, Ivan isn't the villain of the piece; that honor goes to evil nobleman Lord Bostwick (Telly Savalas), whose perfidy leads Sonya into joining forces with the Assassination Bureau. A wild climactic chase in a zeppelin caps this tongue-in-cheek escapade.

Critic Reviews for The Assassination Bureau

Entire cast play their respective roles broadly and each gives a good account of himself.

None too witty black comedy.

It's never as funny as it looks, but it's a pleasant enough ride if you like your companions.

It is all style and little else.

The Assassination Bureau is a mild, amiable entertainment, arousing at most a mild literary curiosity.

A not as clever a black comedy as it might think.

Amusing, but with those stars it ought to be better than it is.

A cinematic curio, but also a delightful souvenir of the 60s.

Audience Reviews for The Assassination Bureau

Fun spoof of spy/action flicks that knows how to use historical events in a clever way. Reed and Savalas are excelent, and Rigg a beauty and the best eye candy a movie could have.

Delightful black comedy with the handsome Reed and the comely Diana Rigg a fun pair of leads. The bad guys are dispatched in ridiculous but entertaining ways and there is a sense that everyone is enjoying themselves which adds to your enjoyment of the film.