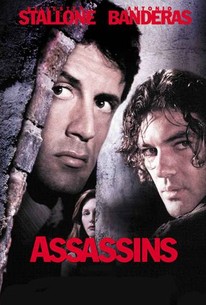 Sylvester Stallone headlines this high-tech action-adventure and plays a ruthless hit man who finds himself stalked by a younger rival. The older assassin, Robert Rath, cannot shake the painful memory of an earlier hit and wants to leave his dirty business after he completes his final assignment for a mysterious boss. He meets his crazy rival, the fearless Miguel Bain while attempting to assassinate an old fellow at a funeral. Bain beats him to it and then makes a ballsy escape in which he ends up in a stolen taxi driven by Rath. It is here that the two become mortal enemies. Later, Rath is given one last assignment: he must kill a female surveillance officer and steal an important disc before she has a chance to sell it. When he discovers that Bain is on the same assignment, the two begin a deadly competition in a large Seattle hotel. Eventually, Rath ends up kidnapping the officer Electra and her large ever-present cat. When he finally meets up with Bain, a terrible struggle ensues and suddenly Rath realizes that the whole scene is a set up. Rath then heads for San Juan, Puerto Rico where residents celebrate the Day of the Dead. Amidst the festivities, the two play a deadly cat-and-mouse game.

Kerry Skalsky
as Buyer No. 2

James Douglas Haskins
as Buyer No. 3

Stephen Liska
as Cop No. 1

Bruce R. Orchid
as Cabbie No. 1

Marta Labatut
as Cemetery Woman No. 1

Choco Orta
as Cemetery Woman No. 2

David Dollase
as Bodyguard No. 1

Jim Graham
as Bodyguard No. 2

John Procaccino
as Reporter No. 2

Nerissa E. Williams
as Reporter No. 3

Michael DeCourcey
as Cabby No. 3

Whitey Shapiro
as Cop No. 6

Stefan Enriquez
as Cop No. 7

Fulvio Cecere
as Cop No. 8

Shirley Oliver
as Cop No. 9

Jeff King
as Helicopter Pilot No. 3

David 'Shark' Fralick
as Buyer No. 4

Barbara Anne Klein
as Cop No. 4

Kelly Rowland
as Jennifer
View All

Oh No They Didn’t: Spielberg and Yimou Want in on "Journey To the West"
Critical Consensus: A Swinging "Party," A Sweet and Sour "16"

The action is stilted and infrequent, reduced to indifferent gun play, car chases and one standout explosion when a gas main ignites.

There's so much dead air floating around in this icy-cool thriller that the director, Richard Donner, seems to be trying for an art-house version of his Lethal Weapon series (The 400 Blows to Your Head?).

An unusually serious, almost sombre thriller from the versatile action producer Joel Silver in which Stallone's a jaded assassin haunted by the past but unable to face the future.

Although he lets Assassins run on too long, Mr. Donner gives it a dependably slick big-budget style.

A surprisingly effective thriller, Assassins is much better than it needs to be, thanks mainly to a fast-paced script and two great supporting performances.

You can pencil in the rest for yourselves - a bullet in the head here, an explosion there, plenty of shards of broken glass, assorted blood splatters, and the annoyingly predictable climax.

Assassins has a frantic surface spread over a shallow vaguely disconnected center.

One of the worst big-budget action movies of its decade.

The plot becomes increasingly silly, and while some pleasure can be had in the improbable set pieces, this is not nearly as much fun as it should be.

An explosive and pulse-pounding edge of your seat action-packed thriller. It packs a full-clip of riveting suspense and fast-paced action from start to finish. It`s smart, tense, terrific and energetic. A wickedly cool and exhilerating assassin-thriller with well-drawn characters and swift execution. Director, Richard Donner crafts one of his best films ever. Slyvester Stallone and Antonio Banderas are just pure dynamite. Stallone gives a strong and effective performance. Banderas gives a sensational and electrifying performance that shows a side of himself we havent seen before.

Devoid of substance and plausibility, but for the better part a decent action flick. Altough the action bits are really good, there's too many flaws to get past for me to rate it any higher. One such defect is the absence of intelligent dialogue. Or perhaps I should say dialogue altogether, as the characters almost spend more time talking to themselves than to eachother. None of them are particularily relatable either, and I didn't care much for who made it out alive by the end. I suppose Stallone's characters is meant to be some kind of anti-hero, but he is too stiff and emotionless for me to feel prompted to root for him. As for Antonio Banderas, well, he overplays his character so much that he often became a mere annoyance. The only saving grace in the cast is Julianne More, who at least gives a little effort in her acting. Anyhow, I couldn't help but draw parallels to Bangkok Dangerous, which is like a modern equivalent to this film, that suffers from similar plot problems. Gratefully, however, this isn't as bad. In conclusion: Fairly exciting, but nothing beyond the average.