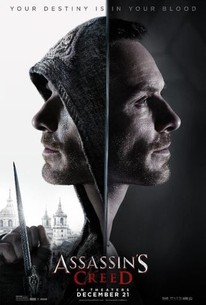 How Family-Friendly is Power Rangers?
On DVD This Week: Sing, Assassin’s Creed, Live By Night Plus More
Pete’s Dragon, The Handmaiden, Iron Fist and More on Netflix and Amazon Prime This Week

I have never seen a group of A-list actors look and act so disinterested.

One is left wracking brains as to why these talented people wasted so much time. It's not even the best videogame adaptation released in the past 12 months. Come back, Angry Birds. All is forgiven.

Films based on video games are often derided as hackwork -- but Assassin's Creed is the most daring film yet from the Australian director Justin Kurze.

The experience of watching Assassin's Creed is, one imagines, not dissimilar to slowly drowning in a giant slop bucket while desperately looking for a rope to climb out from the immense craptitude.

Assassin's Creed is many things, and none of them good. Visually, it's the ugliest movie of 2016 - and keep in mind that I saw Robert De Niro's prosthetic penis in Dirty Grandpa.

Might be the best video-game adaptation there is. Certainly neck-and-neck with "Resident Evil: Extinction." There's a purity to how it doesn't pretend to characterize beyond narrative aims. It's 13% closing credits. It's kind of glorious, really.

When the actors are not talking Assassin's Creed is quite silly and a bit of fun.

This movie was better cast and better made than any video game movie you might have seen in the past 5 years.

The scenes in the past are fun but short-lived, otherwise there were times when I just felt like looking at my bookshelves to give me something more interesting to do...

I have the advantage of multiple Assassin's Creed games under my belt, and even to me it was nonsense. Wastes an INCREDIBLE cast on what will wind up contributing to the seemingly never-ending pile of lacklustre videogame adaptations.

I had huge expectations for this one and yet again the video game to movie doesn't translate. It is a simple case of the right story being created for the film, just make the game with all the plot points. I know as a fan of games I would like to show someone else who doesn't game why it's so awesome. These movies are making it hard to showcase the dynamic game story that eats away hours of my life. This was tedious and boring, the games aren't boring so why the drastic shakeup here?

A cast to die for and a couple of set action pieces do not make a whole movie as this outing well proves, although Cotilliard could melt a glacier with her eyes.

At this point, if you go into a film based on a popular video game, you are surely going to be letdown in some capacity. Whether or not a franchise like Resident Evil is loved for pure schlock or a more recent adaptation like Warcraft is overstuffed with exposition, filmmakers just can't seem to get this genre right. Fans have been telling studios to call it quit with these adaptations for years, so I am not sure why they keep attempting them. It's not like they make loads of cash for studios or anything. Having said all that, with the budget, cast, and promise set in motion by the Assassin's Creed trailer earlier this year, I found myself being much more optimistic. I will not beat around the bush here though. Assassin's Creed is a very, very bad film that has no idea what it wants to be. I struggled to find anything worth commending here, but I am going to dive into a few details why this film shouldn't have ever been made. As far as being unique goes, I can't fault this film for going all out, but it really didn't work as a film. Assassin's Creed follows Cal Lynch, played suitably well by actor Michael Fassbender, as he is killed, brought back to life, placed in a machine that allows him access to the body of one of his ancestors over 500 years ago in order to pursue an object known as the apple. On top of all this, he realizes he is a descendent of an extraordinary assassin, giving him amazing abilities and reflexes. Yes, as a film this plot comes off as slightly ridiculous, but then again so are superhero films. The different between the two is that they find a way to make it work as a live-action property. This cuts back and forth so much during the two time periods that I truly felt like I was watching two films. This could've been handled in a way that could've worked, but ultimately fails to expand on the most interesting aspects. The trailers for Assassin's Creed showed quite a few awesome visuals throughout, and while those visuals are present here, they are just about all that the film offers as well. Most of the film takes place in the present day and I expected to have a fair amount take place here, but there was far too little of the 1400's, which was easily the most interesting aspect of the film. Sadly, even during the exciting moments in the past, the editing that cuts back and forth between time periods at a very rapid rate, jumbling each and every action sequence, felt very tiring. I found myself becoming bored with the action, because the film gave me no reason to care. Normally in a frenetic action film I wouldn't be complaining so much about having few scenes of exposition, but I felt that much more was needed here, as well as a few story tweaks. Instead of obvious exposition reveals, which could've actually made this film better, audiences receive endless amounts of backstory on this character, even though it really isn't needed. The least exciting elements are the ones that are explored more and the characters are not fleshed out enough to really care for. On its surface, this is a cool-looking film, but offers nothing else. I had zero expectations going into this film and still found myself let down. Assassin's Creed truly is one of the worst films of the year. In the end, Assassin's Creed proves that video games should probably just stick to their video game form. I am excited for films like Uncharted that will be coming down the pike soon, but until then, this era of video game adaptions is still as weak as ever. I may be someone who has a soft spot for certain films, like the adaptation of Need for Speed or Prince of Persia, but even small elements couldn't impress me here. It was apparent that the filmmakers took care in their visual style, but the dialogue is incredibly sloppy, the story make little to no sense, and I honestly couldn't wait for this film to end. I am a huge fan of Michael Fassbender and the material presented in this film is unique, but absolutely does not work as a full feature film. I had a headache watching Assassin's Creed and there is not a single person I can recommend this garbage to. The only positive I can give to this film is that it is well-cast. Aside from that, I felt like walking out of the theatre. I am very open minded when it comes to seeing films, so that is saying something. Assassin's Creed should have just stayed on the small screen as a video game.