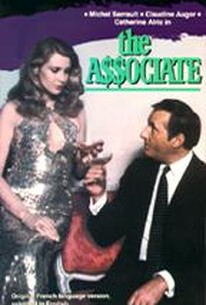 This French comedy stars Michel Serrault as a bland corporation functionary who'll never get ahead so long as he remains a dull little man. Unable to be a success on his own terms, Serrault invents an "assistant", the dynamic, go-getting "Mr. Davis". Pretending to be Mr. Davis' intermediary, Serrault at last makes it big in the business world. A crisis develops when Serrault's investors demand to meet Mr. Davis in person--and when several covetous young ladies show up, claiming to be the mothers of Mr. Davis' children! We aren't about to tell you how Serrault wriggles out of his dilemma: we want you to enjoy The Associate yourself. An American version of the same story, released in 1996, stars Whoopie Goldberg. ~ Hal Erickson, Rovi

There are no critic reviews yet for Associate. Keep checking Rotten Tomatoes for updates!

There are no featured reviews for Associate at this time.