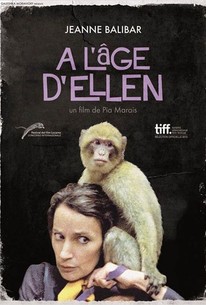 A woman puts herself through some remarkable changes in this drama from director Pia Marais. Ellen (Jeanne Balibar) is a flight attendant edging into middle age who is growing disenchanted with her job and gets a wake-up call about her love life when her boyfriend Florian (Georg Friedrich) informs her he's been sleeping with another woman -- who is soon to make him a father. Florian proposes that he, Ellen and the other woman could all live together, which doesn't agree with Ellen, and after she stuffers a panic attack during a flight, Ellen walks away from her job. With no idea of what she wants to do with herself, Ellen almost randomly falls in with a radical animal rights group and embraces a new life of political action, drugs and free love. Has Ellen truly embraced a new life, or is she simply reacting to her anger over what happened to the old one? Im Alter Von Ellen (aka At Ellen's Age) was an official selection at the 2010 BFI London Film Festival.

Cay Hellmich
as Head of Human Resources
View All

The sometimes hard-to-distinguish variances between being caged and allowed to roam free inform the trials and tribulations of the middle-aged woman at the center of Pia Marais's second feature, At Ellen's Age.

Although benefitting from a starry cast, Marais' story veers into too many directions and doesn't succeed in emotionally connecting with audiences.

Hand-held realism alternates with an otherworldly, alternative world of airport hotels-filled with the lonely and rock-star level of debauchery-and, later, nude street theater.

There are no featured reviews for At Ellen's Age (im Alter Von Ellen) at this time.