At Play in the Fields of the Lord1991 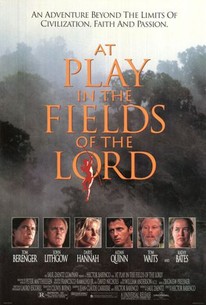 At Play in the Fields of the Lord Photos

In a remote branch of the Brazilian Amazon, Americans Lewis (Tom Berenger) and Wolf (Tom Waits) are stranded when their plane runs out of gas. They are kept company by an evangelist missionary (John Lithgow) and his wife (Darryl Hannah). The preacher and his followers want to preach to the primitive Niaruna Indians, while others are interested in the Niaruna for more diabolical reasons-specifically, business concerns that would like to claim the Indians' land for development. The local police chief cuts a deal with the mercenaries Lewis and Wolf: if they will agree to bomb the Niarunas out of existence, they will be paid enough money to leave the country. Instead, Lewis, part Native American himself,aligns himself with the Niarunas. From this moment on, he and the tribe are doomed. A long-standing pet project of producer Saul Zaentz, At Play in the Fields of the Lord was adapted from the best-selling novel by Peter Matthiesen.

Mutahi Pataxo
as Mutu
View All

Critic Reviews for At Play in the Fields of the Lord

These messages are buried in the very fabric of the film, in the way it was shot, in its use of locations, and we are not told them, we absorb them.

Well over three hours in length, and at best a masterpiece manque, At Play in the Fields of the Lord obviously will not enjoy a 20-week run. For all of its flaws, however, the passion and devotion of Hector Babenco's film comes through.

A thought-provoking film about cultural conflict, power, progress, and the dire consequences of messianic thinking.

Some books should remain books.

Audience Reviews for At Play in the Fields of the Lord

A strong film that makes the best use of great performances, beautiful locations and a gorgeous score to tell a thought-provoking story about cultural differences and the white man's abusive condescension (especially religious) toward those he considers inferior and primitive.

Not as effective a film as "The Mission" which covered the same themes but it is worth checking out if you have nothing else on the go.

At Play in the Fields of the Lord Quotes