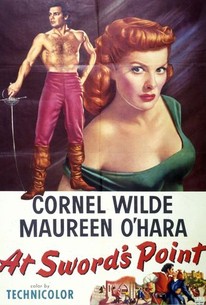 At Sword's Point is about the sons of Dumas' Three Musketeers--one of those "sons" being of the female persuasion, played by Maureen O'Hara. As the swash-buckling daughter of Athos, O'Hara joins the offspring of Aramis and Porthos, portrayed respectively by Dan O'Herlihy and Alan Hale Jr., as well as the bouncing boy of D'Artagnan, played by Cornel Wilde. These second-generation Musketeers are reunited by the ageing Queen Anne (Gladys Cooper), who wants to stem the villainy of her treacherous nephew, the Duc de Lavalle (Robert Douglas). Lunging and parrying throughout the French countryside, the new Musketeers save the day by preventing a marriage of state between the princess (Nancy Gates) and Lavalle, restoring the girl to her true love, prince Peter Miles. Technicolor is the only decided plus in the favor of the lazy and derivative At Sword's Point, which was completed in 1949 but remained unseen in RKO's vaults for three years. ~ Hal Erickson, Rovi

Critic Reviews for At Sword's Point

There are no critic reviews yet for At Sword's Point. Keep checking Rotten Tomatoes for updates!

There are no featured reviews for At Sword's Point at this time.