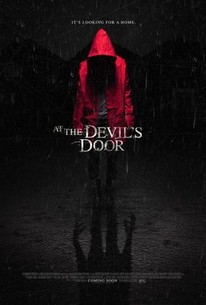 Critics Consensus: At the Devil's Door has no shortage of creepy style -- unfortunately, that isn't enough to distract from an uninspired story that never capitalizes on its potential.

Critics Consensus: At the Devil's Door has no shortage of creepy style -- unfortunately, that isn't enough to distract from an uninspired story that never capitalizes on its potential.

Critic Consensus: At the Devil's Door has no shortage of creepy style -- unfortunately, that isn't enough to distract from an uninspired story that never capitalizes on its potential.

At The Devil's Door Photos

From The Producer of THE STRANGERS and the writer/director of THE PACT comes AT THE DEVIL'S DOOR starring Naya Rivera, Ashley Rickards and Catalina Sandino Moreno. When ambitious young real estate agent Leigh is asked to sell a house with a checkered past, she crosses paths with a disturbed girl whom she learns is the runaway daughter of the couple selling the property. When Leigh tries to intervene and help her, she becomes entangled with a supernatural force that soon pulls Leigh's artist sister Vera into its web - and has sinister plans for both of them.(C) IFC Films

Ava Acres
as Girl
View All

News & Interviews for At The Devil's Door

View All At The Devil's Door News

Critic Reviews for At The Devil's Door

McCarthy shows he's mastered the things we already know scare us onscreen; next, how about something we don't expect?

Things pick up, but too late to really have any impact.

The movie is so consistently moody, and so focused on driving you towards a gut-punch finale, that even valid complaints seem negligible in retrospect.

This is the sort of cinematic patchwork from which Brian De Palma made his name, yet the style and playfulness of Mr. De Palma's work are absent.

Creepy atmospherics aren't enough to compensate for the muddled storyline.

While some uneven plotting and awkward moments in character development mar the process, this is an illustrative example of how capably creepy independent American horror films still have the potential to be.

At The Devil's Door is not a horror movie that has much splatter, dialogue or, when taking the long view, originality. What it does have is real horror, which is the element most required here.

Writer-director Nicholas McCarthy's At The Devil's Door is a fright vehicle that dutifully tingles from time to time but somehow still feels strained in its creepy convictions. [An] atmospheric boofest...

It created such a feeling of unease leaving me thoroughly creeped out long after the movie ended (without necessarily having any big in-your-face scares).

Not all horror films need to shake you to your core, and good jumpy films like this are fun when your expectations are low.

let[s] genre's demonic possessions & reality's housing repossessions collide at an uncanny crossroads where sociopolitics and scares meet. At stake is the American dream itself, emblematised here by a picket-fence home in the suburbs...

Audience Reviews for At The Devil's Door

You know one of the biggest problems with horror movies is nowadays, and perhaps this has even gone farther than, say, the last 5 years, and that is the fact that some of these movies do not have enough interesting material in the script to fill out one hour of screen time, much less 90 minutes of it. If your film is a little shorter than what is expected, then so fucking be it. At least you're realizing that there's not enough intriguing story elements to stretch out a script past its breaking point. I don't see anything wrong with realizing your limitations. Hell, I think most people would actually respect that as opposed to being driven nuts by a film that's all filler no thriller. If you're wondering why I started off with that little rant, it should be obvious if you have a basic level of education, it's because that this movie is probably one of the worst examples of this that I've seen in fucking forever. I swear to Xenu that if you take out all of what I thought was filler, this movie would be, at the very least, 45 minutes long. That's how bad it fucking is. And the sad thing is that this actually starts out in a very promising fashion. The film's has some really good atmospheric moments, like it was actually building up to be an unnerving experience. But it's one of those films that builds up and builds up and builds up but you never get a satisfactory payoff. There's a couple of jump scares here and there, and I've never been a big fan of those, but I think it can work maybe every once in a while. This film completely relies on them. I honestly think this movie was better than that for it to rely on jump scares. Everything in the movie starts off actually pretty well until you get to the real estate agent who, you think, the movie revolves around past the initial set-up. This is where the problems start to come in. Part of me thinks that they were going for a Psycho-type thing where the person you believe to be the protagonist is murdered as a big a shock value thing. The problem is the fact that this first half of the film is absolutely needless and unnecessary. Keep in mind that this is like 30-35 minutes of screen time that's devoted to the real estate agent character. This wouldn't be such a problem if the film told you anything that was absolutely essential to the plot. Once you get to the story from Vera's, the real estate agent's sister, point of view, absolutely nothing changes. It was a long road to get, basically, nothing, since the story is about Vera and not her sister. Talk about fucking pointless. There's also this flashback scene that shows Hannah, I think her name is, babysitting some couple's kid while they go to a party and how she goes to this party and tells the parents that their kid is dead, they're all dead. This takes up, at least, 10 more minutes of time to basically say a whole lot of fucking nothing. That's on top of the 15 minutes devoted to setting everything up for Hannah to sell her soul to the devil. But, at the very least, the first 15 minutes to set everything up is actually essential to the film and it's horrible story that it's trying to tell. So let's take those 10 minutes for Hannah's unnecessary flashback, the 35 minutes devoted to Leigh, the real estate agent, and that's literally 45 minutes of waste on my screen. FORTY-FIVE minutes of absolute nothing that in no way shape or form has anything to do with how the movie ends up. And then the stuff with Vera doesn't even feel like the rest of the movie that we got prior to that. It just feels like they rushed through shit and it didn't really amount to much of anything either. What's the point of this film? I do not know, the story is so muddled that you'd be hard pressed to find anyone who thinks this bullshit makes sense. The only reason this film gets one star, I had it at a 1.5 prior to writing out this review, this is worse than I had originally thought, and that is that the film has some really cool atmospheric moments that, you would hope, would lead to something truly chilling and unnerving. But it never came. Might be one of the worst examples of horror movie script that's just stretched too thin. It's horrible to be honest. Do not watch this under any circumstances, it is a terrible movie.

At The Devil's Door Quotes