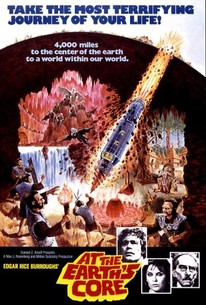 At the Earth's Core Photos

This adventure fantasy is based on Edgar Rice Burrough's popular novel and follows a journey to the center of the Earth with a group of British scientists. They get there with a gigantic burrowing machine. Once at the Core, they find a fantastical world filled with prehistoric creatures, strange bird-like monsters, and war-like humanoids.

Critic Reviews for At the Earth's Core

Doug and the Professor sneak around one strange man-eating vegetable, and there's another one -- which is the original vegetable, photographed from a new angle.

It's the type of movie you can send your kids to, but only if you don't much like them.

The movie is shown like a museum fossil without any enthusiasm. [Full Review in Spanish]

Audience Reviews for At the Earth's Core

Made by Amicus Productions and often confused with Hammer Horror films. Easy to see why seeing as both companies used the same legendary stars, they both made various horror films although Hammer was more traditional mythical fables, and of course all the films shared very familiar visual styles. This British classic really does look every bit like a Hammer horror. The start of the film shows Cushing and McClure in their dapper Victorian suits, sitting within their huge drilling machine which is decked out like 'Sherlock Holmes' study, you half expect Chris Lee to flutter in through a port hole (I do love that drilling machine model though). All American star Doug McClure plays the slightly brash yet tough heroic half of the lead duo, while the eminent distinguished Peter Cushing gives up his usual sinister roles for the fumbling yet likeable good doctor. Together the pair work well off each other and do give an early blockbuster-like chemistry that you see in most modern day flicks. Of course its all very quaint, charming and hammy, tongue planted firmly in cheek...and that's just Cushing's adorable little performance. The film kicks off with a blast as the duo commence drilling deep into the earth, it all feels very much like 'The Time Machine'. No sooner have we got through the silliness of actually getting to the Earth's core the pair are attacked by huge rubber monsters much akin to 'Godzilla's' well known 'men in suits' style. Yes it all looks incredibly tacky and pantomime-ish but remember in its day this was equivalent to a Michael Bay flick. The general appearance of the Earth's core is pretty much your standard 'The Land That Time Forgot' type fantasy jungle with huge plants, vines, trees, primitive humanoids, sexy scantily clad females and various man eating beasties all shrouded in an eerie pink glow. It may all look terribly plastic and fake but again remember this was way before CGI so everything is real, which is pleasing to the eye, well if you ignore the horrendous blue screen live action/creature sequences. The plot makes no real sense frankly, its all very stupid and revolves around some big rubber prehistoric eagle looking creatures that rule this interior world by controlling little 'Jawa' type humanoids with telepathy. They enslave other regular looking humans (all black folk with daft wigs it seems, apart from the sexy women) that live in a nearby village for some reason (some kind of mining or something), and...errr I don't really know. Not sure why these creatures do this, why the little 'Jawa' men obey them, why they like to sacrifice sexy big breasted women (do they eat them? is that what happened there??), why/how the big bird-like creatures are so telepathically powerful etc...so many plot holes you give up. You must look past the crappy plot and its massive inconsistencies, its all about the big cool rubber monsters running amok (could of done with more), Cushing's unbelievably corny stereotypically polite British gentlemanly performance, McClure's ruffled hair and of course Caroline Munro's tanned body. The story starts off really well but does lack severely throughout the middle as the plot goes down the toilet. You're not sure what's going on, why and if there's any point to any of it, end of the day all you know is the goodies have got to kill those big prehistoric bird things...for some reason. McClure looks buff, Cushing looked so damn thin and fragile it worried me, whilst Munro was clearly made up to try and copy the success of Raquel Welch's famous fantasy character. Anyone notice that the screeching sound effects used for the big prehistoric bird things was reused in 'Krull' for 'Slayers', when they got killed.

All the appeal of a Saturday morning kid's show. God bless Peter Cushing for being the one bright spot in this otherwise forgettable film.

I remember watching this movie a few years ago after my granny told me that she was gonna watch it and that I should. I did and I thought it was pretty good. It wasn't the best of its kind that I have ever saw, but it was pretty good. An inventor and his sidekick go on a journey to the center of the earth in a huge drilling machine. Once they get there, they don't discover lava or fire, they discover a lost world and a prehistoric tribe. They get held hostage and from that point on is when At The Earth's Core turns into a good movie. It'll keep you in suspense wondering how they're gonna escape and go back to the surface. If you like one of a kind adventures like this movie, I would definitely recommend getting At The Earth's Core. The only drawbacks I could see was that it was a little bit boring at the beginning, but it gets better all along. The special effects also weren't the best ever seen, but then again it what do you expect of a movie that came out back in the mid 70's? One more thing, most of the time I don't remember a movie all that great after just watching it once. But it's been about 2 years since I saw At The Earth's Core and I still remember most of it. It'll stick with you. NOTE: That was my Amazon review from the year 2000. I haven't seen this movie since then so not sure what I'd think, but I do remember parts of it and it was real neat.

This movie followed most of the other center of the earth movies, but its not all that bad, children would enjoy, also an adult with nothing else to do like myself. This came in a dual pack from MGM Midnite Movies. It took me a while to figure out that Peter Cushing was Dr. Abner Perry as it appeared he lost a lot of weight from my memory of him. The beautiful girl was Caroline Munro who played Princess Dia, This movie was filmed in 1976, little did we know then that a Real Princess Diana would come along. Movie was filled with flying creatures in rubber suites, men who were the slaves of the rubber suited creatures and they reminded me of the plant of the apes early years. Our hero Doug McClure fights off monsters, fire lava, bad guys, wicked looking bird beaked monsters and in the end loses Princess Dia as she wants to stay in her world and not travel to his, myself I would have told the Doctor to go home without me as long as little Princess Dia agreed to cook and clean the cave. Modern day Sci-Fi Buffs would have a hard time enjoying this one, but if your in to the ole school Sci-Fi and Fantasy then Give it a try. Its not the worst film out there so 3 stars and its in my collection

At the Earth's Core Quotes