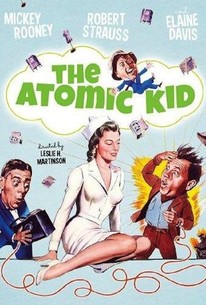 The Atomic Kid strives mightily to wring laughs from the otherwise humorless topic of atomic radiation. Mickey Rooney (who also produced the film) and Robert Strauss play a couple of brainless prospectors who stumble upon a A-bomb testing site. Led to believe that the area is rich with uranium, Strauss goes off to stake a claim, while Rooney relaxes in a "test" house. Before long, a bomb is dropped, a mushroom cloud sprouts in the desert. . .and Rooney emerges from the rubble unharmed. Later on, however, our hero discovers that he's so full of radiation that he glows in the dark, which makes him both dangerous and world-famous. The plot then veers into Cold War territory as Rooney routs a nest of Soviet spies, led by Robert Emmet Keane. The leading lady of the proceedings is Elaine Davis, Mickey Rooney's then-wife (her marital status, transitory though it may have been, was emphasized in the film's opening credits) Believe it or not, this monumentally unfunny comedy was based on a story by Blake Edwards. ~ Hal Erickson, Rovi

Joey Forman
as MP in Hospital

There are no critic reviews yet for Atomic Kid. Keep checking Rotten Tomatoes for updates!

There are no featured reviews for Atomic Kid at this time.