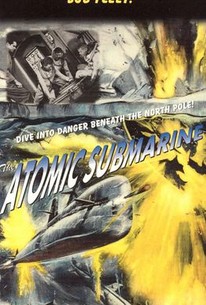 Seasoned serial director Spencer Gordon Bennett helmed this story of a one-eyed, octopoidal space alien, wreaking havoc upon atomic subs at the North Pole. The monster is determined to take over the world, though it seems ill equipped for that purpose. Heroes Arthur Franz, Dick Foran, and Brett Halsey head underwater to neutralize the alien's submerged flying saucer. The cast is peopled with such veterans as Tom Conway, Bob Steele, Victor Varconi, Selmer Jackson, and Jack Mulhall. Movie buffs may wish to take note of the exterior scenes in Atomic Submarine; several of them are played out in front of the easily recognizable studios of Allied Artists, formerly Monogram and later the home of LA's PBS channel 28.

Kenneth Becker
as Powell
View All

Critic Reviews for The Atomic Submarine

Drags until coming alive in the last act.

There's so much going on in the shoestring gem that is The Atomic Submarine that it seems only incidentally science fiction.

Even for a meager exploitation film, The Atomic Submarine isn't anything to brag about.

Audience Reviews for The Atomic Submarine

This film has vivid, obtuse visuals, interesting use of effects, and a great final battle between the sentient alien overlord and the submarine crew. Though a lot of this film drags, it more than makes up for it with great visuals and ideas.