Attack of the Crab Monsters1957 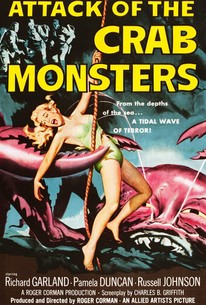 Attack of the Crab Monsters Photos

Irradiated Giant Crabs Eat Scientists' Brains on Pacific Atoll. Is this a headline for a popular tabloid? No. But it is the basic premise of this low-budget but chilling Roger Corman horror outing.

Charles B. Griffith
as Tate

Critic Reviews for Attack of the Crab Monsters

Some delightfully campy idiocy typical of the genre, with that extra spin of dazzling showmanship that separated Corman from all of his peers.

Smarter than you'd be right in expecting a movie called Attack of the Crab Monsters to be, and this is in part because the crabs themselves are that much smarter, too.

A truly weird, even surreal film that offers more evidence that dehumanization -- whether by mutation, takeover, identity transference, transformation or insanity -- is Corman's great theme...

... a bizarre entry in the post-atomic giant creature features with a twist of ghost story.

Audience Reviews for Attack of the Crab Monsters

Yes you read it correctly, we are really plumbing the B-movie depths here with this little beauty. Attack of the crab monsters huh, just when you thought they had used every known bug and fishy-type thing possible, they throw this at you, what's next...lobsters, ahem! Yes its yet another 1957 flick, the year of the giant creature feature, and yet again the movies poster is completely bullshit, at no point does a female get grabbed by a giant crab like that. You notice every one of these giant creature B-movies has an almost identical poster layout. Believe it or not this movie is actually a Roger Corman offering. Maybe not so surprising seeing as this Hollywood legend has seemingly been around forever, making movies in all genres and having worked with everyone. In all honesty I was a bit surprised as I didn't realise Corman went back this far into the 50's giant bug phenomenon. Plot wise its a bit different than the usual fair, not as straight forward as you might expect. OK...first off the basic premise is what you would expect, a team of scientists are sent to a remote Pacific island to look for the last team that went missing. At the same time they are also following on with the research into the effect of radiation in the area after nuclear bomb testing (of course). Naturally some giant mutated crabs ate the last team (shocking), and are a result of the bomb testing (you don't say). The interesting and bizarre twist comes in the fact that these crabs absorb the minds of their victims and are able to telepathically communicate with other living humans. When this happens the telepathic messages from the crabs are in the voices of the dead victims that have been eaten. So not only is this a giant creature feature, its also a weird kind of spiritual ghost story of sorts, well that's the way it comes across at times. Now its clear to see this movie was made on a small budget, the fact its a Corman movie means you can bet your bottom Dollar it was probably made for a pittance. What gives this notion away? well for a start there is nothing to look at, no fancy sets, no lovely locations, no swish props or costumes etc...nothing. It was clearly shot on the coast in America somewhere and inside a small hut for the most part, probably a basic set was used. The giant crabs in question also look pretty terrible it must be said. Yes they do have some decent scale to them, they are large mechanical puppets that do look like crabs and the actors are able to interact with them. The problem being they obviously don't move too well, they tend to just sit in one place and move the odd limb around in jerky motions. The other problem being they have two large humanoid eyes, why would you do this?? it looks ridiculous. This has happened in other giant bug movies before, giving the creature humanoid eyes which in turn gives the creature a face, emotions, something you don't wanna see on a large killing machine. What's more these eyes look dreadful! big pupils, big eyelids and they almost look like they have eyelashes, they make the creature look like a giant child's toy. Seriously what were they thinking?! Speaking of eyes, the lead female character (played by Pamela Duncan) sports some incredibly obvious and large fake eyebrows. Seriously these things look like they've been painted on with a thick brush and look totally out of proportion, its quite absurd really. As for the cast and their acting skills, well, there's not much to say really. We've seen this type of acting in all these big bug B-movies, its a very formulaic type of performance which doesn't really tend to change much. The characters are all the same too, the handsome lead, the older scientist, the attractive female and a few other blokes that are essentially monster fodder. The only difference here is the inclusion of a French character, it doesn't add anything really, other than a different accent to listen to. In general, I didn't like this movie, the plot is just weird with all the telepathic nonsense going on. Other plot explanations just don't make any sense either, like how on earth these crabs manage to create earthquakes on the island, and why, but mainly how. Apparently the crabs want to reach the mainland so they can eat more humans and absorb their minds, no clue why they would wanna do this, or how this benefits them, but there you go. It feels more like an alien invasion sci-fi flick with all this talk of absorbing human minds, mind you (no pun intended), the film is atmospheric at times I'll give it that. There were moments when it did feel a bit creepy, especially with the haunting telepathic messages and the clicking noise the crabs make. There was also the odd bit of gore too, a decapitation and the loss of a hand, don't get too over excited though.

Was really great to see this movie come out on DVD. I remember seeing this when I was growing up on Long Island. As a teen I used to enjoy going down to local waterfront and doing some crabbing, after seeing this I was a little wary and you would catch me down on the docks after dark for quite some time. This was a great drive in movie, The crabs were kind of cheap but all in all a good movie for the sci fi era. 3 1/2 stars 3-21-13

For a second-rate creature feature, "Attack of the Crab Monsters" manages to be a decently entertaining watch if viewed on a lazy afternoon. The film was directed by Roger Corman, who directed 55 movies in his career along with producing around 400, most of the film's he worked on were very low-budget B-movies such as this one. Originally released as a double bill with another Corman sci-fi feature "Not of this Earth", the film has very bare-bones production value but juggles enough interesting ideas (such as the crabs absorbing the knowledge of it's victims) to make it respectably entertaining on it's own right. The acting is pretty standard for the character archetypes each one of the them is assigned to and the screenplay contains some really silly science but the film moves at such an efficient pace that it never fails to keep the viewers attention. The effects for the giant crabs are very cheap-looking and cheesy, which is probably why the movie sticks to mostly showing their arms or showing the whole crab in quick-edit shots. Overall, it is a decently entertaining 50's creature feature, but not the best.

Attack of the Crab Monsters Quotes