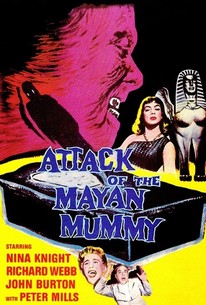 American "B"-movie mogul Jerry Warren can always be counted on to turn a cheap but fun horror import into a boring, unwatchable mess -- as proven by this tedious effort, originally produced in Mexico as The Aztec Mummy and later padded out with deadly-dull exposition. The original film is silly enough; the first of a popular Mexican series, it involves the awakening of the mummy Popoca to avenge the desecration of his tomb by infidels. As a cost-saving measure, instead of re-dubbing the Spanish dialogue, Warren added new scenes with American actors, who drone on about reincarnation and past-life regression and bring the action to a screeching halt. ~ Cavett Binion, Rovi

Steve Conte
as The Hired Thief

Bruno Ve Sota
as The Newspaper Editor
View All

Critic Reviews for Attack of the Mayan Mummy

There are no critic reviews yet for Attack of the Mayan Mummy. Keep checking Rotten Tomatoes for updates!

There are no featured reviews for Attack of the Mayan Mummy at this time.

Attack of the Mayan Mummy Quotes