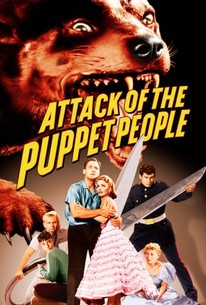 Attack of the Puppet People Photos

In this campy horror movie, an eccentric and lonely dollmaker entertains himself by shrinking teenagers and keeping them in his shop. This provides the dollmaker with hours of entertainment until one day he shrinks a rebellious fellow who wants to be big again.

Mark Lowell
as Salesman
View All

Critic Reviews for Attack of the Puppet People

A misbegotten amateurish but somewhat funny low-budget b/w horror tale of a lonely doll-maker given to shrinking human beings into dolls.

Audience Reviews for Attack of the Puppet People

The title is misleading, unlike other fifties movies of this kind, and should be called attack of the puppet master instead. The guy turns these people into puppets, and they have to try to get back to normal. It's a pretty simple story, and it's kind of cute, but not all that good in the end. It's just okay.

Acually, they're Dolls, not Puppets. I suppose that Attack of the Doll People just didn't sound as scary(?).

Attack of the Puppet People Quotes