Attack Of The Unknown2020 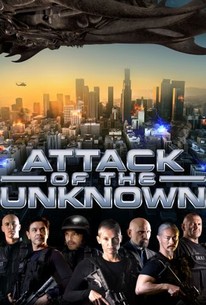 Attack Of The Unknown Photos

As a fleet of extraterrestrials bears down on Earth, a group of elite soldiers with the resources to protect their fellow humans from the imminent threat becomes trapped in a rural detention center while transporting a notorious crime kingpin. The team must then battle their way out of their precarious situation if they are to work for the good of humankind. Written and directed by Brandon Slagle. Robert Lasardo, Richard Grieco, Jolene Andersen, and Tara Reid co-star.

Robert B. Oliver
as Callaway

Michael DiNallo
as Cole
View All

Critic Reviews for Attack Of The Unknown

It may feel as though the most generic cop thriller has been edited into a cheap knock-off of Independence Day at times, but it's all harmless fun.

There are no featured reviews for Attack Of The Unknown at this time.

Attack Of The Unknown Quotes