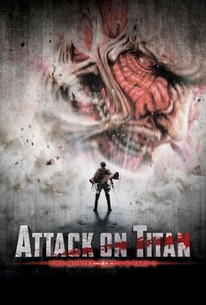 The man-eating humanoids called Titans first appeared over 100 years ago, devouring humans without motive or remorse. What was left of mankind retreated behind three enormous concentric walls. After a century of relative peace, a young boy named Eren is growing restless. He dreams of one day seeing the world behind the walls. But on the day he and his friends Armin and Misaka decide to investigate the great and mysterious wall that keeps them penned in like cattle, a titan larger and fiercer than any that have been seen before breaches the wall, kicking a large hole through the base of it. Now, titans are flooding the city, consuming much of the surviving human population. Eren and his surviving friends enlist to fight against the insatiable monsters. The future looks bleak, but there's more to Eren than meets the eye: he may be humanity's last hope against extinction.

Jun Kunimura
as Kubal
View All

Critic Reviews for Attack on Titan: Part 1 (Shingeki no kyojin)

The actors are self-conscious and dreadful, but their fringes are undeniably impressive, and the film has a schlocky B-movie appeal, propelled by terrific special effects ...

A very irregular script that does not know how to transcend its original starting point. [Full Review in Spanish]

Attack on Titan will definitely be a commercial success; however, as to the actual result of the adaptation, all hopes are with the second part. Personally, I have my doubts.

While the movie dazzles with CGI effects and high-octane action, it is the excellent performances by the trio that make it a must-watch.

Watch Attack On Titan for the tension, the monsters and the gore, but don't expect a plot or characters even remotely as compelling as its animated counterparts.

This existentialist meditation on free will and murderous impulses may be worthy of Kafka or Camus ... One of the most perversely original fantasy movies in recent memory.

With the focus on action the character development is sorely underwritten with a whole army of young warriors being shoddily introduced meaning their eventual deaths carry little emotional weight but it sure is mesmerising watching the mayhem unfold.

If you're a fan of hardcore bonkers cinema, this needs to shoot directly to the top of your must-see list.

Audience Reviews for Attack on Titan: Part 1 (Shingeki no kyojin)

A great beginning and a great ending, but it's let down by a really saggy midsection.

The first part of another one of these two parter Manga adaptations that the Japanese are very enthusiastic about. Even whist considering the medium specificity to the limitations one can go through considering it was a Comic/Manga and adapted into a hit Anime Series, the film still hold up pretty well as a solo outing to a Post-Apocalyptic action thrill ride. I might say I did have my queries having been familiar with the Anime series, but hardly any of the changes are bothersome let alone bringing the film to a downright terrible disposition. While it film was strong on visuals, production design, special effects and casting, it's a little too short for even one film, just immediately trying to set up what'll come next in it's sequel/second half.

As far as adaptations go, the live-action version of Attack on Titan is one of the most disappointing experiences I've had in my entire life. There's a whisper of the source material hidden somewhere in the film, but it's been so brutally massacred that everything on screen feels like a desecration to the AoT name itself. Perhaps that's a bit extreme, but this is definitely NOT a film for devout fans of the manga or anime. It's simply far too detached. We have characters with the same names in the film, but they're simply not the characters we know. Mikasa and Armin are perhaps the worst casting decision in the film, and this isn't even accounting for the fact that they are so severely unlike their original characters, that it's like watching an entirely different version of Attack on Titan--which is perhaps the best way to approach it. As an action/horror thriller, Attack on Titan works very well, pulsating with intensity and grisly death. And yet, there's no story. No background. The characters are so painfully two-dimensional, which is hard to watch considering the incredibly emotive and profound impact their backgrounds have in terms of the tale being told. The source material was all there to be worked with, and almost every single aspect of it is ignored for the sake of action and bloodshed. Aside from a few cheap thrills, particularly during the film's final scenes where we see Eren's Titan (IT'S AMAZING) and the squad in kill-mode using their maneuvering gear (ALSO AMAZING), Attack on Titan's live-action version is a massive disappointment. If you're a fan of a manga or the anime, you will despise it. Don't say I didn't warn you. (And if you don't believe me: Eren's mom never gets eaten and Levi was removed from the plot. Seriously.)