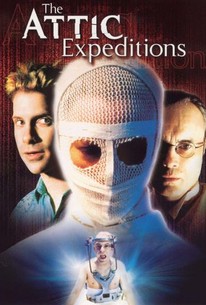 A disturbed young man discovers his problems are all in his head, but isn't sure just how they got there in this tale of terror. Trevor (Andras Jones) is a young man who has been sentenced to a long stay in a mental hospital after brutally killing his girlfriend. However, the longer Trevor is in stir, the more he wonders if the murder ever really happened, or if it's all just a horrible fantasy implanted in his brain by Dr. Elk (Jeffrey Combs), the sinister director of the asylum. The first directorial effort from former editor Jeremy Kasten, The Attic Expeditions also features comic actor Seth Green, horror film vet Ted Raimi, and veteran shock-rocker Alice Cooper.

Scott Levy
as Orderly
View All

Critic Reviews for The Attic Expeditions

The Attic Expeditions is a wildly uneven film.

Audience Reviews for The Attic Expeditions

Trevor Blackburn may be a schizophrenic murderer, or he may be an amnesiac sorcerer, or he may be the victim of an unethical psychological experiment; or he may be all three at once. Unexpectedly effective and paranoid mid-budget horror mind-bender, not for those who demand clear answers.

Eh. I rented it for J. Combs, but it's no From Beyond.