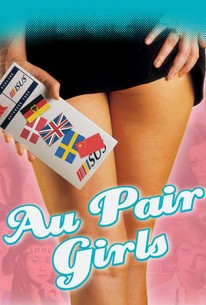 Val Guest, veteran director of many interesting British films covering a multitude of subjects, joined the nudie-cutie bandwagon of the 1970s with The Au Pair Girls. Anyone who's taken first-year French will probably know that the title refers to young foreign girls living in England who perform domestic chores in exchange for room and board and the opportunity to learn the English language. In this film, the girls' "services" range far beyond mere light dusting. It's the 1972 equivalent to those old stag reels of the 1950s with titles like Lucky Pierre Goes Fishing. Among the au pair girls in this R-rated effort are Gabrielle Drake, Astrid Frank, and Me Me Lai. ~ Hal Erickson, Rovi

Milton Reid
as The Guard

Me Me Lai
View All

Undeniably goofy, and almost laughably dated, but that actually adds to its appeal. There's just something about its carefree 70s kitsch that is hard to resist.

This horrible sex comedy has an unintentionally hilarious first half, as a relentlessly bouncy score pounds into the viewer's head with nagging tastelessness. Imagine a jaunty romp like Tom Jones' "It's Not Unusual" weaving in and out of a film for a half hour -- you either tear your hair out or just start laughing at the absurdity. "They come from here, they come from there/No matter where they may come from, they're always welcome everywhere...AU PAIR! With swinging hips and swinging hair, they add a dream to the swinging scene every fellow needs to share...AU PAIR!" Unfortunately, the film turns much duller once it settles down -- particularly a dreary subplot about the seduction of a rich, pampered innocent. The other three au-pair tales are only a smidge more engaging, but fear not -- in the end, the girls come together to be whisked away for a lifetime as a sheik's mindless sex slaves. Hooray for happy endings! Streamable on Netflix (as if anyone could be bothered to rent the DVD of something like this).