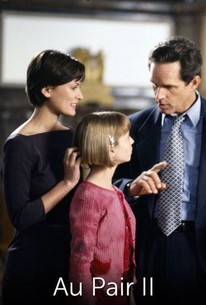 This sequel to the 2000 cable movie Au Pair finds wannabe executive Jenny Morgan (Heidi Lenhart) still working as the nanny for the children of widowed CEO Oliver Caldwell (Gregory Harrison). Oh, and Jenny and Oliver still aren't married, and are keeping their romance a secret for fear of offending Oliver's imperious mother-in-law Nell Grayson (June Lockhart). The BIG COMPLICATION this time around attends the merger between Caldwell's firm and the company run by zillionaire Carl Sennhauser, whose avaricious grown children Cassandra (Rachel York) and Michael (Robin Dunne) intend to use Jenny to financially ruin Oliver. As before, Oliver's kids Alex (Jake Dinwiddie) and Kate (Katie Volding) come to the rescue of practically everyone--and in the bargain, they continue playing matchmaker for their dad and their nanny. Also looming large in the scheme of things is Carl Sennhauser's precocious grandniece Brigitte (Celine Massuger). Filmed on location in Austria, Au Pair II made its first Fox Family Channel appearance on April 22, 2001.

Jan Preucil
as Grimaldi
View All

Do Fox Family movies really need sequels? That question is answered quite clearly with Au Pair II, a limp second-go of the popular telepic that aired in 1999.

There are no featured reviews for Au Pair II at this time.